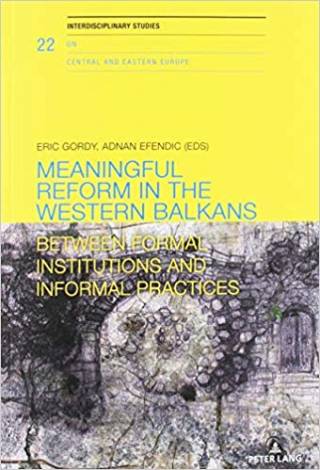 The book Meaningful Reform in the Western Balkans: Between Formal Institutions and Informal Practices, edited by Eric Gordy and Adnan Efendic and published by Peter Lang Group in the Interdisciplinary Studies on Central and Eastern Europe series, contains collection of articles which provide policy implications related to the problem of achieving substantive reform on the basis of harmonising legislation in Western Balkan (WB) countries with the standards of the European Union (EU).

While WB states have generally been successful in adopting legal reforms that make up a part of EU conditionality, many laws remain unenforced, amounting to “empty shells.” In the space between law, as it is written, and practices as they are engaged in everyday life, exists a gap, characterized by informality, clientelism, and exchange often based on strong tie relationships. Some instances of informality undermine the goal of establishing rule law and contribute to corruption. Others offer valuable solutions to persistent social problems or represent traditional vehicles of social cohesion that should be promoted. The recommendations in this book seek to address both, constructive and damaging instances of informality, and to identify policy measures that can help to harmonise not only legislation, but existing informal practices on the ground.