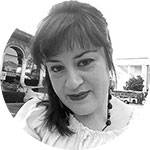 Armanda Hysa is an anthropologist, project leader of the CHAR team, is co-founder and director of executive board of Qendra e Kerkimeve Historike dhe Antropologjike – Center for Historical and Anthropological Research, Albania. She is also a researcher at the Department of Ethnology, former Institute of Folk Culture, Albanian Academy of Sciences, now Institute of Cultural Anthropology and Study of Arts, Centre of Albanological Studies. She defended her PhD in 2012 at the University of Tirana. From October 2012 to October 2014 she has been research and teaching fellow, Alexander Nash Fellow in Albanian Studies, at School of Slavonic and East European Studies, University College London. Her research interests include urban Ottoman heritage, with specific focus on Balkan charshiya (old bazaars), identity and ethnic relations in Macedonia, and interethnic relations between Serbs and Albanians, with specific focus on the recent phenomenon of mixed marriages between Serbian men of Southern Serbia with Albanian women of Northern Albania.