Marta Jenkala is Associate Professor (Teaching) of Ukrainian at the UCL School of Slavonic and East European Studies. She has taught at SSEES since 1999, having previously served as External Examiner in Ukrainian (1993-99). Marta’s connections with UCL and SSEES go back to her student days, when, in addition to studying for a BA Honours Degree in French and Linguistics at UCL, she attended Victor Swoboda’s Ukrainian language, linguistics and literature classes at SSEES. She subsequently gained a PGCE in secondary education, and an MA in Second Language Learning and Teaching.

In parallel with her work at SSEES, in the years 2006-2018 Marta established and led  Ukrainian language courses for the Ukrainian Studies Programme at the Slavonic Department, University of Cambridge. She also served as Director of the Ukrainian Institute in London (2004-2010). For many years she acted as chief examiner in Ukrainian for UK and international examination boards.

In addition to her mainstream work, Marta promotes the learning and teaching of languages in general and Ukrainian in particular. She co-organised a range of CEELBAS workshops and conferences on the teaching of Slavonic and East European languages, led SSEES participation in the FAVOR project, and co-authored the online resource Teaching Slavonic Languages. With respect to Ukrainian, Marta creates materials aimed at supporting the learning and teaching of the language, publishing these on her language portal, and gives taster courses to teachers, students and schoolchildren, both in SSEES and beyond. She has also created an innovative Ukrainian beginners’ online course on UCL Moodle, which can be taken for credit by undergraduate students. Another of her interests is the status of Ukrainian studies in the UK, and Marta has presented on this topic at conferences and workshops at SSEES, at other UK universities, and in Ukraine.

Marta is an experienced editor and translator, and enjoys mentoring students and younger colleagues embarking on Ukrainian-English translation. She has also given presentations and published articles relating to Ukrainian language and culture, and has broadcast on the latter on television and radio, with a particular focus on the pysanka. 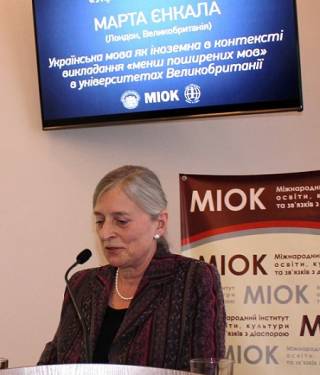