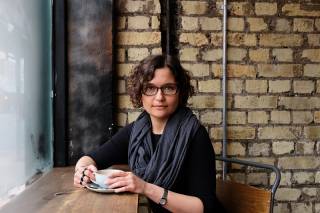 PhD Research: My project is devoted to the cultural mechanisms that have contributed to the rise of right-wing populism in Poland. I want to develop an original theoretical framework for analysing the mutual influences between symbolic shifts in the “official” political discourses on the one hand, and elements of popular culture, on the other hand. This framework builds on the concept of kitsch, which I see as a key to defining cultural populism. My interdisciplinary approach and focus on cultural mechanisms complements theories of populism centred on economic inequality and anti-liberal backlash.

Research interests: Right-wing populism, nationalism, modern Polish Catholicism, representations of patriotism and their influence on politics. As a pro-choice activist I am also engaged in the public debate on reproductive rights and women’s rights in Poland as well as international feminist cooperation.

Publications: Kotwas, Marta, and Jan Kubik. Forthcoming. “Symbolic Thickening of Public Culture and the Rise of Right-Wing Populism in Poland” (with Jan Kubik). East European Politics and Societies: and Cultures.