The London première of Dziga Vertov, Anniversary of the Revolution 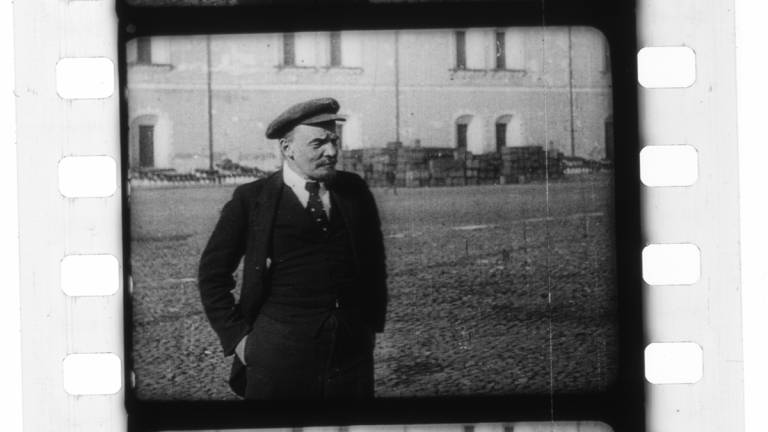 The London première of a rediscovered masterpiece Dziga Vertov, Anniversary of the Revolution (Godovshchina Revoliutsii, 1918)

One of the most important filmmakers of the twentieth century, Dziga Vertov is best known for his seminal documentary Man with the Movie Camera (1929) and for the radical manifestos published during the 1920s in which he outlined his theoretical principles and voiced in trenchant and provocative terms his conviction that newsreels and documentaries should be the foundation of all Soviet cinema.

Anniversary of the Revolution (Godovshchina Revoliutsii, 1918) was Vertov’s first historical newsreel. He would later describe the film as his ‘industrial exam’. It is a compilation documentary, consisting of newsreel footage that Vertov assembled and edited while working at the Moscow Film Committee in 1918. A commissioned work, it was screened in several cities simultaneously as part of the official celebrations of the first anniversary of the October Revolution in November 1918.

For many decades Vertov’s film was regarded as irretrievably lost. Although a substantial amount of newsreel material from 1917 and 1918 had been preserved in the Russian State Archive of Film and Photo Documents in Krasnogorsk, it was impossible to reconstitute the structure of Anniversary of the Revolutionary as there was no reliable record of its chapter headings, the sequence order within these chapters, and the texts of the original intertitles. Then, in 2017, the film scholar Svetlana Ishevskaia discovered the full text of the film’s intertitles while researching the Vladimir Maiakovskii archive at the Russian State Archive of Literature and Art. Thanks to her discovery and to the painstaking efforts of Dr Nikolai Izvolov, a film historian and researcher employed at the Museum of Cinema in Moscow, who has spent many months reconstituting Vertov’s documentary, we now have a version of the film that matches the Vertov’s original intent with a reasonable degree of fidelity.

Lasting over two hours, Anniversary of the Revolution is an epic work. It consists of thirteen chapters, each with its own title, which chronicle some of the most important events that took place between the overthrow of the Romanov dynasty in February 1917 and the so-called Kazan Operation in September-October 1918, the Red Army’s successful campaign, overseen by Leon Trotsky, to wrest control of Kazan from the Czechoslovak Legion during the initial stages of the Civil War along the Eastern Front.

The film will be screened in Russian with English subtitles.

This event is free to attend and open to all.