"I don’t think I would have been able to write the first paper of my doctorate without the strong foundation that IRDR provided." 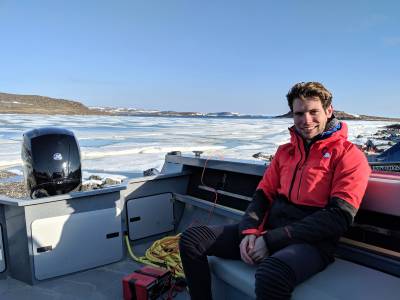 Angus Naylor studied on the Risk, Disaster and Resilience MSc and is now a PhD Researcher at the University of Leeds, Priestley International Centre for Climate.

My current research focuses on the ways through which Inuit experience and respond to climate change. Specifically, I explore how broader social, economic and political factors – including those rooted in colonialism – intersect to determine how subsistence hunters in Ulukhaktok (Inuvialuit Settlement Region) adapt to changing weather, sea ice, ocean and land conditions. My doctorate thus far has examined factors underlying what makes hunting groups productive (e.g. group composition, the amount of time spent on the land, choice of hunted species, availability of gasoline etc.), and how changing conditions are making hunting more difficult (e.g. earlier break-up and later freeze-up of ice, altered snow pack stability, wind and wave strength and direction). Our research findings are being used to inform the Government of the Northwest Territories’ stance on federal carbon taxes (in relation to how they might affect gasoline use in hunting activities), and we also hope to raise awareness within the federal government more broadly relating to the costs of hunting, and the challenges and obstacles hunters currently experience prior to and during their time on the land.

Why were you interested in the Arctic? What’s special about the region?
Initially I think I had considerable misconceptions and misunderstandings about what Arctic research would be like, in part due to how the idea of ‘the Arctic’ is portrayed in the West (a homogenous, pristine, and untouched wilderness). So, while I certainly had an interest in working in the Arctic it was perhaps rooted in this misplaced sense of what it really was. The true story of the Arctic is diversity, in terms of its environments, peoples, cultures, and ways of life, and – though I hate the word – resilience: to me this is what actually makes it special. The small part of the Arctic that I have been fortunate enough to experience – the eastern part of Arctic Canada known as the Inuvialuit Settlement Region, where I spent eight months between 2018 and 2020 – is very different from the assumptions we often make in Europe. It is modern, with Internet, Facebook, Instagram, all of those things. But what makes it truly extraordinary is the way that despite all of this change (and attempts by previous administrations in the Canadian Government to erase them) the communities have still retained their sense of identity. Modernity has been blended with tradition. Subsistence hunting still occurs, though it now happens with snowmachines and rifles, drum dances still take place, but they are in community halls and recreation centres, and sealskin garments are still made and worn, but now for their practicality and as a show of resistance and empowerment.

What are some of the challenges that people living there face?
Though the answer most people would expect from this might be “climate change”, my work and experiences have shown me that many of the challenges people in Arctic Canada face are often more rooted in socio-political marginalisation and colonisation. Underfunding of infrastructure and a lack of sufficient subsidies mean that the cost of living in Inuit Nunangat (Arctic Canada) is consistently higher than it is in the south. In Ulukhaktok (pop. 444), for example, goods and services in 2018 were between 90–95% more expensive than in Edmonton (pop. 982,000). While on the Canadian Community Well-Being (2019) index, a measure of factors such as housing provision and quality, income per capita, labour force participation and employment, and educational attainment, Inuit communities scored on average 16.2 percentage points lower than non-Indigenous communities in 2016. Of course, I don’t mean to imply that climate change isn’t an issue, more that the burden of climate change and the challenges that come with it would be eased for communities in Arctic Canada if many of these other problems (which are easier to fix) were properly addressed by the federal government.

And conversely, what are the benefits?
One big benefit is the environment, and by extension foods that are harvested from the environment, such as caribou, muskox and Arctic char. Being able to get out on the land (hunting, fishing, and harvesting subsistence foods) for Indigenous Arctic peoples means that they can retain a connection to their cultural past, which has been linked to improved mental health and wellbeing, and can get the necessary nutrients they need for a strong and stable diet from a food security perspective. This is becoming more difficult with factors such as the cost of running and maintaining snowmachines and rifles, and the introduction of a 2019 federal carbon tax on fossil fuels (for which no alternative yet exists in these communities), but generally subsistence participation rates remain high in Arctic Canada.

How do you think the reality of living in the Arctic differs from what most people imagine?
The reality of Arctic living is starkly different from how many people in Europe understand it to be. For one, people no longer live in igloos, instead they live in prefabricated housing, it is often quite grey in the Arctic (there isn’t much snow) between the months of July and September, and people often go to the shop and eat/drink similar foods to those we have in Europe, such as cans of Coke, or spaghetti Bolognese (though this is often made with muskox meat rather than beef). Although many peoples still speak their traditional language (Inuvialuktun or Inuinnaqtun in Ulukhaktok) to a greater or lesser degree, the language that is used for most conversations in English (as a result of colonisation).

Did you come across any reindeer on your travels?
In the part of the Arctic where I do my research reindeer are called caribou, and there are two primary sub-species: barren-ground caribou and Peary caribou. Barren-ground are more like what we think of as conventional reindeer (minus the red nose!), whereas Peary caribou are a fair bit smaller (usually averaging about 85kg in weight) and are usually lighter coloured. In part due to suppressed population numbers, I’ve never seen actually seen a live caribou in the Arctic, despite having travelled quite far out from the community where I work. I have, however, eaten it (which is one of its primary uses, the other being for clothing). I can say that while some parts of it are very nice, I would not recommend caribou brain!

Let's talk a bit about your sudies in the IRDR. How did your Master’s prepare you for your PhD and your career?
My MSc with IRDR prepared me exceptionally well for my PhD from a theoretical and conceptual perspective. IRDR took a very critical approach to understanding disasters and vulnerability, particularly when looking at the root causes of what makes people and places susceptible to disasters and risk. This is something that I have applied throughout my PhD, and I don’t think I would have been able to write the first paper of my doctorate (a conceptual approach to climate vulnerability that looks at how it intersects with socioeconomic and political factors) without the strong foundation that IRDR provided me. I was also fortunate enough to have a supervisor within IRDR who was interested in working with me to turning my MSc thesis into a paper. This is quite rare at many UK universities, and without this experience I don’t think I would have been able to produce much of the subsequent publishable work in my doctorate.

Why did you choose the IRDR?
My first degree was in Geology and Physical Geography, so while I had a good understanding of the physical science basis for natural hazards, I hadn’t really been able to explore the social sciences side of risk, nor anthropogenic hazards more widely. At the time, IRDR was one of very few places that offered a more critical lens in both of these areas (to my knowledge it still is!), so it seemed like the natural choice. This is before we consider the bonuses of living in London, and the reputation of UCL more widely in terms of employability and future academic prospects!

What did you enjoy most about the course or your studies more widely?
For me I really enjoyed the range of topics that were covered in the syllabus, but also the freedom that was given to explore case studies that interested me when it came to completing assignments. In just one year I was able to write about how misunderstandings of hazard maps and local power structures affected the death toll at Nevado del Ruiz, the root causes of the Chernobyl disaster, the effectiveness of temporary housing and early warning systems in the 2011 Great East Japan Earthquake and Tsunami, the humanitarian challenges of the Palestine/Israel conflict, and the role of social marginalisation and inequality in the differential impacts experienced by New Orleans’ citizens following Hurricane Katrina.

Would you recommend it to someone interested in studying at Master’s level?
If you have a keen interest in hazards and disasters, specifically the causes of disasters and why they happen, I would strongly recommend the IRDR as a place to study. For me, the IRDR struck a perfect balance between contact time when it came to constructing an independent research project/thesis, the freedom to explore topics that interested me specifically, and the diversity of ways that my knowledge was examined (presentations, posters, exams, reports, essays).

What’s your advice to anyone thinking of studying in the IRDR?
Independent work and study to examine the root causes of disasters takes time and considerable research effort. So, starting a master’s degree in this area isn’t something to be taken lightly. That being said, of all the studying I have done at university level, the motivation needed to achieve an MSc with IRDR came easily. This was in part due to the interesting topics covered in the course, but also the passion that the staff and lecturers also have in teaching them.