The many faces of PI3K delta

By developing a deeper understanding of PI3K signalling, Professor Bart Vanhaesebroeck and colleagues have identified an innovative way in which it can be targeted to treat cancer.

As a PhD student, Professor Vanhaesebroeck was keen to jump on the gene cloning bandwagon - this was the pre-Human Genome Project era when isolating and cloning genes was a big deal. However, it was not until he began his first postdoc that the chance to clone a gene arose. The lab he joined at the Ludwig Institute for Cancer Research in London had just cloned genes encoding members of a key cell signalling pathway, PI3K (phosphoinositide 3-kinase). Since human genes often came in families, Professor Vanhaesebroeck went fishing for relatives - having a hand in the cloning of genes encoding several other PI3K family members, including PI3K delta.

Having achieved his initial ambition, he realised that understanding the biological role of genes was more interesting than cloning them. To establish his niche in a competitive field, he chose to work on mice, developing a series of 'kinase-dead' mouse models in which particular PI3K isoforms were present but non-functional, in a bid to mimic the effects of pharmacological inactivation of PI3K action [1].

These mouse models laid the foundation for significant advances in the understanding of PI3K signalling. Of the different PI3K variants, the PI3K delta isoform was particularly interesting as, unlike other isoforms, its expression was limited to white blood cells. Professor Vanhaesebroeck and colleagues went on to make the key discoveries that the delta isoform played a critical role in cellular responses initiated by signalling through T-cell and B-cell antigen receptors [2] and in allergic responses [3].

This work established PI3K delta's potential as a drug target across multiple conditions, including immune disorders and inflammation and blood cancers. Professor Vanhaesebroeck's studies were incorporated into a company, Piramed, developing PI3k alpha- and PI3K delta-targeting drugs, which in 2008 was sold to Roche for £160m. PI3K delta inhibitors have now been approved for the treatment of specific B-cell malignancies.

Although PI3K is commonly mutated in cancers, attempts to kill cancerous cells by targeting PI3K have met with limited success. The most successful application of delta-targeting drugs has been in the treatment of B-cell leukaemias, particularly those responsive to signalling through antigen receptors. However, suggests Professor Vanhaesebroeck, these treatments are probably not killing cancer cells directly but interfering with how leukaemic cells interact with their environment, causing them to be released from lymph nodes and bone marrow into the bloodstream where they are more susceptible to cell death.

Meanwhile, Professor Vanhaesebroeck was perplexed by findings his group had made in mice in which PI3K delta had been genetically inactivated. Despite their compromised immune function, the animals appeared to be mounting highly effective responses to implanted tumours [4]. In a collaboration with his former postdoc, Professor Klaus Okkenhaug (now Professor of Immunology in Cambridge), his team realised that, although inactivation of delta was mildly dampening cytotoxic 'aggressor' immune cells, it was having a bigger impact on the regulatory immune cells that normally act as a brake on these aggressors, ultimately tipping the balance in favour of an anti-cancer response. Earlier work had revealed that delta is critical to the action of regulatory T cells [5].

This idea could explain some troubling findings from clinical trials with delta inhibitors. Although often highly effective when used as back-up therapy in relapsed B-cell leukaemia patients, when used as first-line therapy delta inhibitors were associated with severe adverse reactions, particularly in the gut and the lungs. Counter-intuitively, suggests Professor Vanhaesebroeck, these reactions do not reflect immunosuppression but an immune over-reaction, to harmless commensal organisms in the gut, lungs or skin.

Professor Vanhaesebroeck's early desire to clone genes involved in immune responses was driven by a belief that signalling molecules could be manufactured and used to boost anti-cancer immune responses. His later work revealed more about the biology of immune responses and cancer, and suggested alternative ways in which this aim could be achieved. His aim throughout has therefore been not just to understand but also to apply new knowledge. He now continues to pursue multiple collaborations, including several with industry and possibly new spin-0ut companies, to hasten the development of new PI3K-based treatments for a range of conditions including several types of cancer. 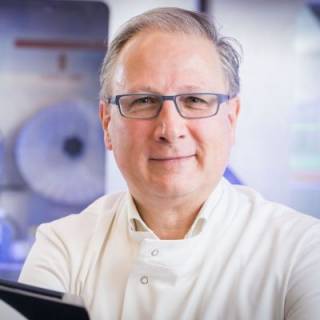