This is the second in a new series of articles where we interview members of staff at the MRC Prion Unit at UCL. We hope it will give people an idea of what goes on behind the scenes, the broad range of roles involved in running an Institute and highlight some amazing staff. 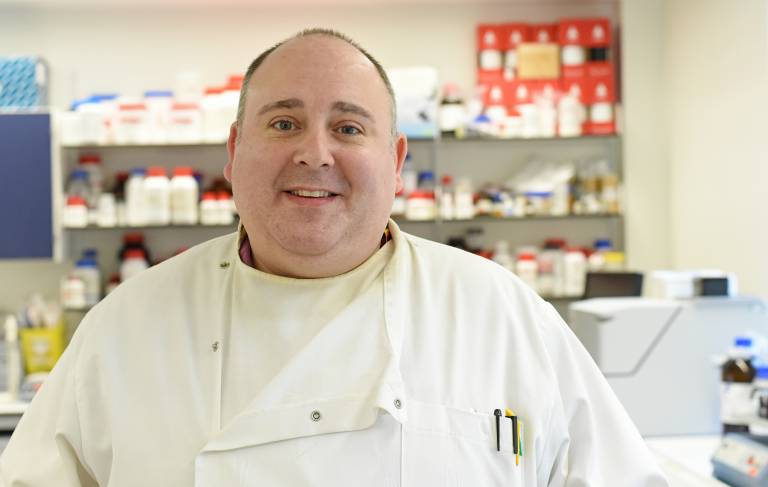 By Lauren Woolley, PhD Student and Co-coordinator for Public Engagement

To kick off the New Year with another addition to our series of staff profiles, I interviewed Mark Batchelor, who works in Programme 7 led by Jan Bieschke at the MRC Prion Unit at UCL, studying the structure and dynamics of prions and their ligand interactions. Mark has been working at the Unit for over 23 years now, so he has a more experience than most of what it’s like to be a part of a research institute. His expertise in protein biochemistry are essential to the work of many Programmes across the Unit.

Lauren: What do you do in your role as research assistant?
Mark: [Laughs] Everything! I’m a protein chemist, so the main part of my job is protein production (making proteins) for our group, but on top of that I have lots of other projects. I do some primary cultures, which is growing neurons (or brain cells) in the lab, and molecular biology techniques. I also do the protein production for projects going on in other groups as well.

Lauren: Do you have any specialist knowledge which you use to do your job?
Mark: It is less specialist knowledge and more a willingness to try lots of different things. All proteins behave differently, so it’s important to be happy to start with a general protocol (set of instructions) and then adapt it to the specific protein you are trying to make. With new proteins it often fails the first time so you have to be prepared to keep trying new approaches.

Lauren: It seems like something you’ve learned through experience. How long have you worked here at the Unit?
Mark: I’ve been here 23 years now. When I first started, the Unit was actually part of St Mary’s Medical School, then it moved to the Institute of Neurology and now we have our own building here in Fitzrovia.

Lauren: Wow that’s a long time to work at the same place! What were you doing before this?
Mark: I worked for a Biotech company in Glasgow doing virus validation. People would come to us with a small scale version of their purification processes and we would test whether they had the capacity to clear viral contamination. This was done by spiking a sample with a known amount of virus and seeing how well their purification process removed the viral contaminant.

Lauren: That sounds quite different from what you do here. Can I ask how you got into what you are doing now? What made you decide to work with prions instead of viruses?
Mark: I originally got the job due to my experience in protein production. The Biotech Company I worked for moved into testing decontamination assays for prions sticking to metal. This was the first time I had really heard about prions and when I started working on the assay I found it interesting and very new. When the research assistant position came up at the Prion Unit I was looking for a chance to move to London, so I applied.

Lauren: What would you say is your favourite part of working at the Prion Unit?
Mark: It’s really nice and friendly here. I enjoy the Friday coffee mornings, sitting upstairs having lunch with everyone, catching someone in the stairwell for a chat or having a natter in the office! There is always someone around to say hello to, or to ask you how things are going.

Lauren: You’ve been here a long time, do you have a most memorable work day?
Mark: I have a couple, for different reasons. I’ll tell you about one from a few years ago. When Jan started at the Unit, we started working on some proteins called Desmin. No one at the Unit had ever made them before or even worked with them. Normally people working with these proteins just buy them pre-made, but we decided to make them. It was a very long six months trying to get it to work and when I finally managed it after such a long time, the feeling on that day was phenomenal.

Lauren: It sounds very rewarding.  It’s obvious you enjoy your work, but are there any downsides to your job?
Mark: The worst part is when you have spent two weeks making a protein and then you accidentally spill it in your fume hood and watch all that work float away… and have to start again from the beginning!

Lauren: That does sound very frustrating. If you weren’t doing this job, what would you do instead?
Mark: I would be a Lawyer. I am actually a qualified solicitor, but I really like science so I haven’t ever used it.

Lauren: Oh really! So what did you want to be when you were little? A scientist? Or a lawyer?
Mark: Neither. My career ambitions were completely different when I was tiny. My Dad was in the military so we lived on an army base. On every base there is a naafi which is basically the supermarket inside the barracks. I always wanted to be the shop manager.

Lauren: What’s your biggest interest or hobby outside of science?
Mark: I’m a bit of a nerd, so my biggest hobby is Pokemon Go – I am a massive player I have to admit. Also cinema, I go weekly and love to see as many films as I can.

Lauren: I have one last question to finish off. Do you have a favourite science fact?
Mark: Ooh that’s a hard one. I think it would be this: The average human body carries ten times more bacterial cells than human cells.

Lauren: I’m not sure if that is cool or creepy. Thanks for taking the time to talk with me! Is there anything else you want people to know?
Mark: Yes. Whenever you read a scientific paper where the researchers have used a recombinant protein (a protein made in the lab by someone like me), they write about it in a few sentences - it actually took some poor soul three or four weeks working in the lab to make that protein! It looks like a tiny contribution, but even though it is only a small part of the paper, it takes a lot of work.

Thank you to Mark for telling us some of the highlights from his many years here at the MRC Prion Unit at UCL. We are enjoying sharing the stories of our wonderful staff members here at the Unit, and hope we can showcase the important work that happens behind the scenes so that scientific discoveries can happen.