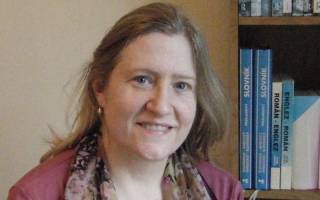 Dr. Stroschein's research examines the politics of ethnicity in democratic and democratising states, especially democratic processes in states with mixed ethnic or religious populations. She has published articles in Perspectives on Politics, Party Politics, Nations and Nationalism, Europe-Asia Studies, and Ethnopolitics, as well as other journals.

Her book Ethnic Struggle, Coexistence, and Democratization in Eastern Europe (Cambridge 2012, paperback 2014), received honourable mention from two book awards (details below). The book examines how contention helped forge common rules and institutions during the democratic transition in these ethnically-mixed states. Her current book project, funded by the Independent Social Research Foundation (ISRF), focuses on local city councils and party politics in ethnic enclaves, and its implications for centre-local governance relations.

She a Vice President of the Association for the Study of Nationalities, and Associate Editor of the journal Problems of Post-Communism.

Other Selected Articles and Blog Posts

I am especially interested in supervising PhD students working on topics of ethnic party politics and local politics, and potentially projects on populism or relational approaches to politics.