Richard McMahon contends that due to China's longstanding narrative of the EU as a willing partner in establishing a multipolar world, the state may be misinterpreting a rising European narrative about EU sovereignty. 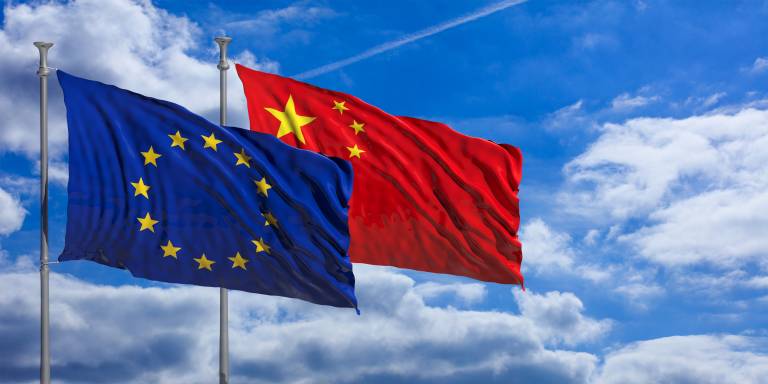 As two of the world’s three economic superpowers, relations between the EU and China are crucial to the intensifying geopolitical struggle between China and the US. In this triangular drama, narratives about the other actors play a central role. Influenced by its longstanding narrative of the EU as a willing partner in establishing a multipolar world, China may be misinterpreting a rising European narrative about EU sovereignty.

The multipolar partner narrative has been the dominant prism through which China’s media, elites and general public have interpreted Sino-European relations since the 1990s. In this narrative, China and Europe, as rising global powers, will naturally both oppose America’s unjust unipolar hegemony. Research therefore demonstrates that Chinese opinion and media are generally positive towards the prospect of a more united Europe, acting autonomously on the world stage. This completely contradicts regular Western portrayals of China as determined to divide and rule in Europe.

China therefore welcomes European narratives about making the EU a sovereign geopolitical power, whose military capacities to give it ‘strategic autonomy’ from the US and Nato. European sovereignty narratives have roots in de Gaulle’s ambitions for Europe to act as an independent third superpower. They were stimulated by European impotence during the 1990s Balkan Wars, opposition to the 2003 US invasion of Iraq and the US Trump presidency’s hostility and unreliability towards allies. The determination of recent Democrat Presidencies to ‘pivot to Asia’ and confront China has further eroded faith in Washington as a protector. A striking expression of EU sovereignty was the signature of a Comprehensive Investment Agreement (CAI) with China in December 2020, while the Democrat Joe Biden was president elect, directly confronting the bipartisan consensus in Washington on a China threat narrative.

This is precisely what China’s multipolar ally narrative would predict and hope for. However China’s increasing assertiveness and authoritarianism under Xi Jinping, and close support for Russia, despite Putin’s invasion of Ukraine, have also powerfully redirected EU sovereignty narratives against China. The recent expansion of the scope of European sovereignty narratives from military autonomy to worries about economic and technological dependence exacerbate this China focus. Security concerns about the Chinese telecoms company Huawei and European struggles with Covid vaccine and PPE procurement for example stimulated demands for European technological sovereignty. The Xi and Trump administrations’ mobilisation of diplomatic and economic tools for geopolitical competition reinforce this broadening of sovereignty.

Under the Scholz government, Germany has begun to embrace the European sovereignty narrative. As Germans consider the US a vital security partner, however, this helps shift European sovereignty from French demands for ‘strategic autonomy’ to act in the wider world towards calls for ‘strategic sovereignty’. These emphasise control over internal affairs, free from outside coercion. EU strategic sovereignty discourse highlights the many ways that commerce, the environment and global governance connect Chinese and European domestic politics, so that Chinese decisions affect Europeans and vice versa.

While China pushes to strengthen its representation in global governance institutions, the EU aims to use them to defend its economic sovereignty from alleged abuses by Chinese industry, for example through EU-US-Japan discussions since 2017 on reforming the World Trade Organisation (WTO). In 2018, during Trump’s simultaneous trade wars against the EU and China, a Beijing ‘charm offensive’ assured Brussels that it supported multilateralism, ‘the rules-based international trading system’ and even WTO reform. Despite this, EU did not ally with China against the US and a year later officially labelled China ‘an economic competitor’ pursuing ‘technological leadership, and a systemic rival promoting alternative models of governance’.

In the latest of a series of Chinese economic and judicial coercion measures against Norway, Canada, Japan and Australia, Beijing in 2021 levied unofficial trade sanctions to punish Lithuania for its links with Taiwan. The EU responded by referring China to the WTO and proposing an EU Anti-Coercion Instrument. EU-US unity on sanctioning Russia may well be the key factor constraining China from supporting Putin’s invasion.

The EU has also expressed its sovereignty by attempting to impose climate regulation on foreign business activity in Europe. China and the US criticise the EU's planned Carbon Border Adjustment Mechanism (CBAM), proposed in 2021, just as they opposed an earlier attempt to price emissions of foreign airlines flying to the EU. CBAM, taxing imports from countries with low or no carbon pricing, will particularly affect China.

The EU has most assertively expressed European sovereignty from China in investment policy. In 2019-20, the bloc began coordinating member state assessments of security risks to 5G mobile networks, encouraging several members to freeze out Huawei. The EU’s new foreign investmentscreening mechanism, launched in 2020, also largely targets security risks from Chinese firms. Chinese repression of its Uyghur ethnic minority led to tit-for-tat sanctioning of officials and the European Parliament’s refusal in 2021 to ratify the CAI.

The multipolar partner narrative still attracts Chinese academic and media proponents. However it is increasingly undermined by the multiple crises that, since 2008, have undermined faith in the EU as a rising power, EU criticism of China’s human rights record, the Xi government’s assertiveness and authoritarianism and, most recently, Europe’s mobilisation of its sovereignty narrative against China. Putin’s invasion will decisively impact on the difficult narrative choice that now faces China. Some Chinese academics call for partnership with Europe in multilateral global governance but narratives of an ideological ‘new Cold War’ are increasingly powerful, pitting China and Russia against a united West.