It's usually easy to condemn political violence. But perhaps not when we agree with it.

Julie M. Norman explores the role that political bias plays in shaping our attitudes to political violence and asks how violence threatens the foundations of our democracies. 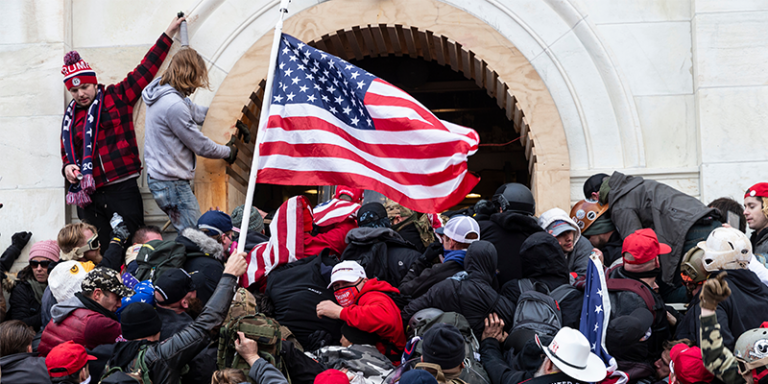 When the January 6 Committee issues its interim report in June, it promises to shape Americans’ understanding of what transpired at the Capitol in 2021. But it will also influence the conception of political violence more broadly, including when (if ever) violence is legitimate, when violence should be considered domestic terrorism, and how we should prosecute and punish violent actions.

My new research demonstrates how our political biases complicate our answers to these questions. Using a U.S.-based experimental survey (YouGov, N = 3,640) administered in June 2021, I show how political ideology (liberal/conservative) influences how we perceive the legitimacy of an act of violence when we are aligned with the cause.

To look at political violence beyond the politics and emotions of January 6, I analyzed public responses to hypothetical acts of violence perpetrated to advance both right-wing or left-wing agendas regarding abortion, climate change, and immigration.

The acts of violence -- such as bombing an organization promoting reproductive rights or bombing a fossil fuel lobbying group -- differed only in their target. I examined the extent to which conservative/liberal sympathies for a given issue shape views on what constitutes terrorism and what is morally justifiable.

The good news is that a strong majority (77 percent) of respondents -- conservative, moderate, and liberal -- viewed the actions as terrorism, and 72 percent viewed the actions as morally unjustifiable. Further, even when ideologically aligned with the cause, most respondents did not see political violence as strategically effective. This has some pragmatic implications: even relative moral “support” for an action does not equate to approval of its use if it is not seen as effective. This finding may help temper other broad conclusions of studies that indicate “support” for the use of force or violence for political ends.

But the terrorism label carries real consequences, as it has direct implications for how crimes are prosecuted. Terrorism is a federal charge in the United States, whereas most violent crime is prosecuted at the state level. Further, a terrorism designation changes the extent to which state, local, and federal officials can take steps to monitor the activity of groups or individuals.

Finally, the study has broader implications for how we understand our conceptions of violence, morality, and legitimacy. We assume that we think of violence as normatively “bad” and illegitimate, but it is evident that we easily rationalize some violent actions as more morally justifiable—or at least not condemnable as terrorism— when we agree with the cause, even if we do not consider such actions to be strategic or legal. At the same time, we are quick to condemn identical actions that go against our interests and are ready to label such actions and movements as illegitimate.

These broader questions of perceived legitimacy extend beyond the issues identified in the study to include other recent episodes of political violence, in which political ideology has influenced what we see as permissible or justified, further reinforcing our political identities and contributing to further polarization.

Dr Julie M. Norman (@DrJulieNorman2) is a Lecturer in Politics and International Relations at University College London and Co-Director of the UCL Centre on US Politics (@CUSP_ucl).