Government and the Green New Deal

After years of market dominance, Fergus Green argues that we cannot achieve a Green New Deal without significant state involvement in the economy. 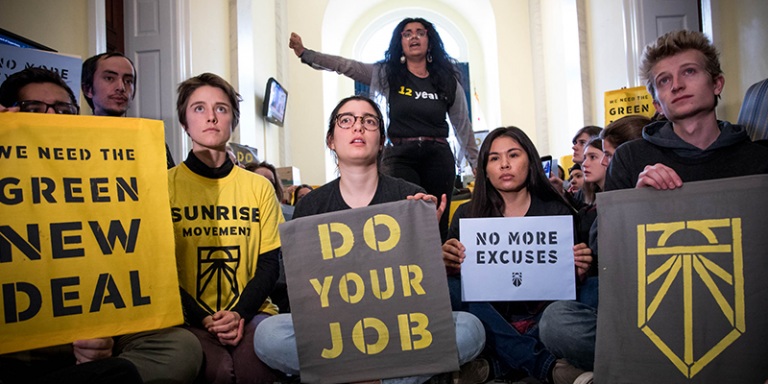 Like most of us who practice or write about public policy for a living, I was educated on a strict diet of neoclassical public economic orthodoxy. Among the core tenets of this orthodoxy are that markets provide the benchmark for efficient outcomes, so government’s role should be limited to fixing market failures (though only when benefits outweigh costs), and that each market failure should be addressed by a single, tailored policy instrument.

Fifteen years of working on climate change—overlaid with a decade of studying and researching political theory—have made me deeply sceptical of this orthodoxy. Today’s salient crises, from COVID-19 to the rise of populist authoritarian politics, have only fortified this scepticism.

For starters, efficiency (effectively, the maximisation of society’s aggregate wealth) is a false god. Wealth only matters insofar as it contributes to human wellbeing, and for any given person that contribution diminishes marginally with each additional dollar. So if much of society’s wealth is hoarded by the rich—as it is now—it is doing little to improve most people’s lives. Worse, the resultant inequalities harm people’s health, social relations, economic performance, democracy, and the environment.

It’s true that, as any public economist will tell you, more aggregate wealth means more resources are theoretically available for redistribution. But as even a casual glance at the politics of taxation and welfare spending in liberal democracies will reveal: redistribution is politically fraught; wealth, once distributed, is not so readily “available” for redistribution. That is why the state has a key role in fundamentally shaping the skills and resources that people bring to markets in the first place (“predistribution”) and the rules and norms that govern market processes (“marketcraft” or “market shaping”). And there are things governments ought to do for reasons of social justice—to fulfil peoples basic or human rights—whether or not they maximise efficiency, or even wellbeing.

For all these reasons, markets should not provide the benchmark against which to judge the role of the state in the economy.

The public responses to the COVID-19 pandemic and Russia’s invasion of Ukraine serve as important reminders that there have always been key sectors of the economy that require an extensive role for the state, and for which enhancing efficiency is not a high priority. When it comes to keeping people safe against threats from rogue powers and deadly viruses, public money can usually be found and new regulations justified. And rightly so. Yet, when faced with the enormity of the climate crisis, governments have been largely unwilling to use the full range of state capabilities to transform key sectors such as energy, transport, agriculture, and the built environment.

And in my own recent work, I’ve explored how economic and social inequalities fuel climate change both directly—driving carbon-intensive patterns of consumption and production—and indirectly, by enabling wealthy elites to obstruct climate policy, by making financially insecure citizens fearful of the economic effects of climate policies, and by undermining the social and political trust necessary for social cooperation. These linkages justify far-reaching policy programmes that tackle climate change as part of a broader agenda of social and economic transformation, along the lines proposed by proponents of a Green New Deal.

If we’re going to navigate the stormy straits of the 21st century, tinkering at the margins of markets just won’t cut it.