See our Twitter feed below for PLORAS updates and events.

Scroll down for PLORAS media coverage.

Channel 4 - Can You Rebuild My Brain?

Professor Cathy Price featured in a Channel 4 documentary on neuroscience.

The programme was broadcast on 30 January 2018.

BBC Two - Andrew Marr: My Brain and Me

Professor Cathy Price took part in a documentary where Andrew Marr explored the latest scientific understanding of the human brain, and how it relates to his stroke recovery.

The programme was broadcast on 14 February 2017. BBC Radio 4 - The Life in My Head: From Stroke to Brain Attack

In October 2014, Robert McCrum, journalist and stroke survivor, visited our centre as part of a new BBC Radio 4 programme: The Life in My Head: From Stroke to Brain Attack.  He took part in the study and interviewed Cathy Price to find out what the results from his MRI scan and language assessment mean in the context of our research.

The programme was broadcast in March 2015. 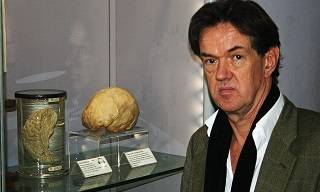 Read more about the programme (pdf).

PLORAS featured in a local news piece on Peterborough City Hospital's involvement in the project.

The research team at the hospital are one of our Clinical Research Network sites.  We received very positive comments from stroke survivors and their families who saw the feature - and then decided to take part in the project!

Peterborough City Hospital's invovlement with PLORAS featured in an article in the Peterborough Telegraph.

She tells readers about her experiences of taking part, and gives advice to anyone thinking of getting involved in research!

We featured in the Different Strokes Summer 2013 Newsletter (page 22).

Research participant Penny explains why she chose to take part in PLORAS.

To mark Brain Awareness Week, one of our volunteers was featured in the Northampton Chronicle & Echo about her visit to our research centre.

The Wellcome Trust produced a film of a stroke survivor visiting our research centre for their Big Picture Education Resources.

We held a coffee morning for stroke survivors at our research centre.  This was to mark World Stroke Day and give stroke survivors the opportunity to talk to PLORAS researchers about their experiences and about the research.

We had articles feature in Haringey Independent, Surrey Comet, Sutton Guardian, This is Local London and Wandsworth Guardian.