Professor Tim Williams (UCL Institute of Archaeology) has been awarded the Sir Richard Burton Medal 2022 by the Royal Asiatic Society of Great Britain and Ireland for his long-running exploration, archaeological, and documentation projects in Beirut and Central Asia. 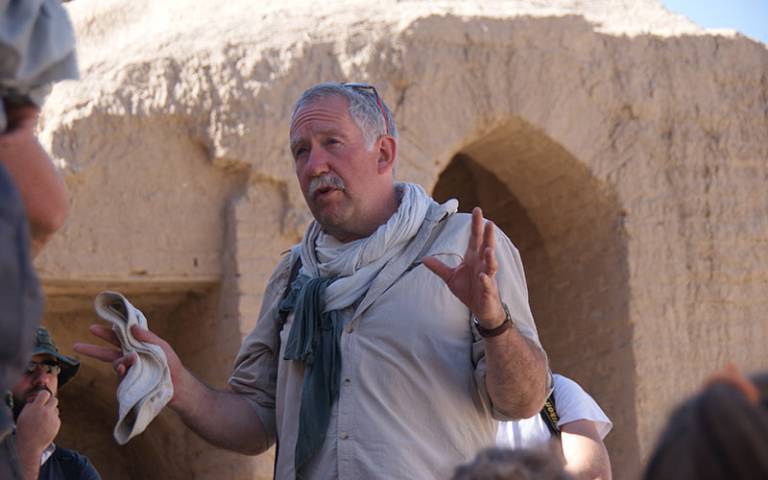 Tim Williams, Professor of Silk Roads Archaeology at the Institute, is known for his collaborations with local partners on the Silk Roads and for work on the UNESCO World Heritage nomination of the Silks Roads, including the ICOMOS Silk Roads thematic study.

Professor Williams has worked in circumstances and regions which are extremely challenging, both in terms of politics and the local conditions. He has always ensured that local institutions and people are involved and engaged in the work, and that the results of his explorations and excavations are made widely available online and in print in local languages.

He has led the international Ancient Merv project in Turkmenistan for over 20 years, a collaboration between the Turkmenistan Ministry of Culture, the Ancient Merv State Park and the UCL Institute of Archaeology, which aims to research and conserve the remains of one of the great historic cities of the Silk Roads.

The Royal Asiatic Society, founded in 1823, provides a forum for those who are interested in the history, languages, cultures, and religions of Asia to meet and exchange ideas. Sir Richard Burton was one of the Society’s most famous and adventurous members. The award was established in 1923, in conjunction with the Richard Burton Memorial Lecture Programme, which was set up a few years before to mark the 100th anniversary of Burton’s birth. Awardees are also expected to deliver the lecture, on Burton, his travels, or some related topic.

The medal will be awarded to Professor Williams at a forthcoming lecture to the Society entitled ‘Along the Silk Roads of Central Asia’.