UCL’s iconic Portico was lit up green this week and shone out across the campus in the heart of London to signal the official launch of the university's Generation One climate action campaign. 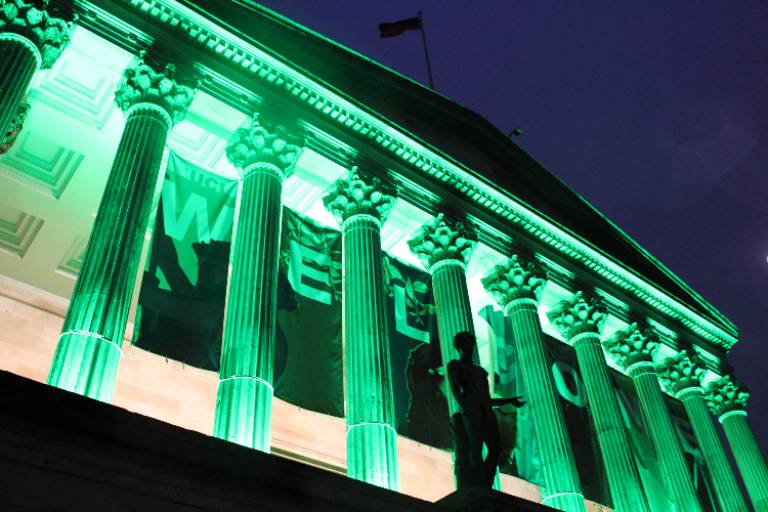 To help protect our planet, UCL is asking everyone to take simple actions - from increasing the fuel efficiency of their cars to choosing charity shops and clothes swaps for new outfits, or just walking, cycling and using public transport more.

The science behind each action and its impact is explained through a series of intriguing questions to explore online and in a free exhibition open to the public on the UCL campus. Supporters can even pledge to become citizen scientists by measuring the height of a tree in their area to help calculate how much carbon the world’s trees can absorb.

The invitation to make a pledge comes ahead of the UN’s COP26 climate conference next month but the aim is to mobilise as many of people as possible to start making small changes now and then carry on beyond the negotiations in Glasgow.

Through a series of events, exhibitions and calls to action, Generation One offers everyone the chance to understand the science behind the issues facing our planet. It’s inspired by the words of former US President Barack Obama: “We are the first generation to feel the effect of climate change, and the last generation who can do something about it.”

Generation One champion, physicist, oceanographer and broadcaster Dr Helen Czerski (UCL Engineering) said: “The science is clear: the consequences of allowing global warming to exceed 1.5C are extremely severe. That gives this generation and those that follow a gigantic task - to shift the way our civilisation works, and to do it quickly and fairly, led by the best knowledge available.

"It’s daunting, but what we have on our side is a population with vast creativity, enthusiasm and a deep foundation of science, engineering and culture. We need to motivate and empower everyone to act urgently, and to demand that our politicians show true leadership in this time of crisis.

“COP26 matters and important policy wheels are turning, but I see far quicker action coming from the grassroots - from individuals, organisations and businesses who are making their own decisions for a better future. Everyone can participate in this project to build a better world, and that’s what UCL’s Generation One campaign is all about.

"I encourage everyone to explore the Generation One campaign, to learn about and debate and think about the issues facing us, and to ask your family and friends to do the same. We’re all part of this and together I really do believe that we can make the changes that our planet desperately needs.”

The launch of Generation One follows the creation of the UCL Climate Hub earlier this year, which showcases some of the key actions UCL is taking to help achieve a zero carbon university by 2030.

Other upcoming activities includes a series of climate themed UCL lunchtime lectures and a free comedy show at the Bloomsbury Theatre with climate economist and comedian Dr Matt Winning (UCL Institute for Sustainable Resources) who will be interviewed afterwards by neuroscientist Professor Sophie Scott (UCL Institute of Cognitive Neuroscience).

UCL students will also be taking part in their own climate summit – UCL’s first Youth COP – where they will learn about climate change negotiations and the partisan issues likely to inform the tense and potentially dramatic proceedings at the UN’s COP26 in Glasgow.

To find out more about UCL’s Generation One campaign and how you can get involved, follow #UCLGenerationOne and join our new era of climate action.