A patient has been fitted with a cutting-edge 3D printed prosthetic eye for the first time ever, as part of a unique collaboration led by UCL researchers and Moorfields Eye Hospital NHS Foundation Trust. 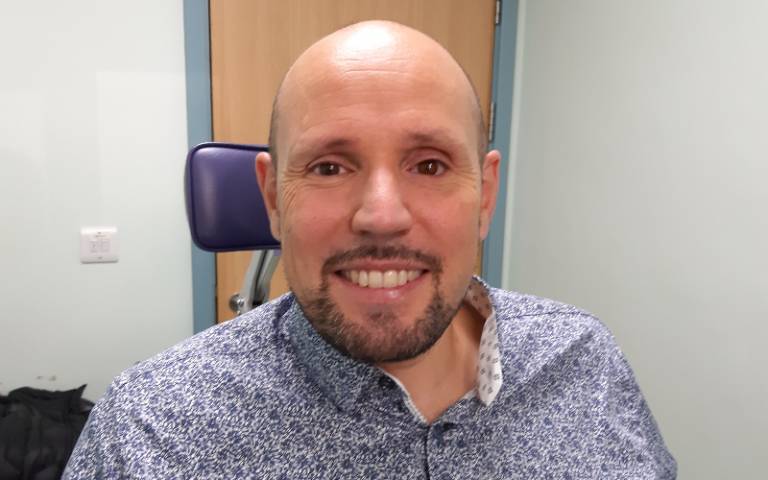 A 3D printed eye is a true biomimic and a more realistic prosthetic, with clearer definition and real depth to the pupil. Unlike traditional methods, it is made using digital scans of the eye instead of an invasive mould of the eye socket; a process often so difficult for children they require a general anaesthetic.

Along with better aesthetics, the production process is also much faster. Traditional acrylic prosthetic eyes are hand-painted and take about six weeks to complete. With 3D printing, once a scan has been taken, the prosthesis can be printed within two and a half hours. It is then sent to an ocularist to finish, polish and fit. The whole process takes just two to three weeks.

In a world first Steve Verze, a patient at Moorfields, has replaced his traditional prosthetic eye, for a 3D printed version, which he will use as his sole prosthetic eye.

Steve said: “I’ve needed a prosthetic since I was 20, and I’ve always felt self-conscious about it. When I leave my home I often take a second glance in the mirror, and I’ve not liked what I’ve seen. This new eye looks fantastic and, being based on 3D digital printing technology, it’s only going to be better and better.”

This first 3D prosthetic fitting is a precursor to a forthcoming joint UCL-Moorfields clinical trial, which will evaluate the effectiveness of 3D printed eyes vs traditional hand-made eyes. The trial will recruit up to 40 patients and assess the two prostheses for motility (movement), cosmesis (look), fit and function, comfort, mucous discharge and general benefits of use in daily life.

Each subject participant will wear each prosthesis for four months; motility assessment will be made at the start and following three months’ wear.

Principal Investigator, Professor Mandeep Sagoo (UCL Institute of Ophthalmology and consultant ophthalmologist at Moorfields) said: “We are excited about the potential for this fully digital prosthetic eye. We hope our forthcoming clinical trial will provide us with robust evidence about the value of this new technology, showing what a difference it makes for patients. It clearly has the potential to reduce waiting lists.”

People wear a prosthetic eye if the eye has not developed normally since birth, if there has been an accident leaving the eye scarred, or if the eye must be removed for severe pain or a cancer in the eye.

Around 0.1% of the population need a prosthesis (60-70,000 people in England). Prosthetic eyes are currently replaced around every five years, and every eye socket is unique.

With a printed prosthesis, the manufacturing time is cut in half. The patient has their eye scanned, and the software maps out a 3D model of their eye socket for the printer. It also scans their good eye, to ensure a precise match. The files are transferred to the 3D printer in Germany, where it is printed within 2½ hours, and the eye is then sent to our ocularist to finish, polish and fit. The whole process takes just two to three weeks.

This collaborative project involves software work with Ocupeye and Fraunhofer, then the eyes are printed through Fit AG in Germany.

The trial is supported by the NIHR Biomedical Research Centre at Moorfields Eye Hospital NHS Foundation Trust and UCL Institute of Ophthalmology, and by Moorfields Eye Charity through the generous philanthropy of the Drayson Foundation.