A pioneering new study led by UCL scientists has revealed, for the first time, a layer of genetic material involved in controlling the production of tau; a protein which plays a critical role in serious degenerative conditions, such as Parkinson’s and Alzheimer’s disease. 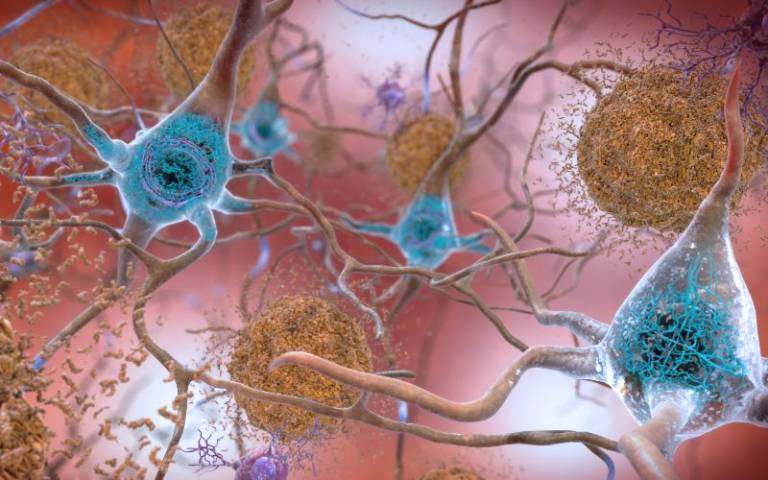 The international research, conducted in mice and cells, also revealed this material is part of a larger family of non-coding genes* which control and regulate other similar brain proteins, such as beta amyloid associated with Alzheimer’s and alpha-synuclein implicated in Parkinson's disease and Lewy body dementia.

Researchers say the breakthrough findings, published in Nature, shed an important new light on how proteins linked to neurological conditions are produced and controlled, and could pave the way for new treatments for a wide range of dementia related diseases.

Lead author, Dr Roberto Simone (UCL Queen Square Institute of Neurology), said: “Tau plays a vital role inside our brain cells: It helps to stabilise and maintain the cytoskeletal structures that allow different materials to be transported to where they need to be. We know that too much tau is detrimental – the excess unused tau converts into toxic species that may be responsible for damaging cells and driving the spread and progression of degenerative disease. However, despite the fact that tau has been studied for more than three decades, until now we did not know how tau protein production is controlled.”

For the laboratory-based study, researchers identified a section of genetic material known as ‘antisense long non-coding RNA’ (lncRNA). They discovered this material does not make tau directly but helps to regulate, fine-tune and repress the production of the protein inside brain cells. This precision provided by antisense lncRNA in tau regulation could be crucial for smooth functioning of the brain’s nerve cells.

Research group leader, Professor Rohan de Silva (UCL Queen Square Institute of Neurology) said: “Excitingly, we found that the lncRNA that controls tau is not unique. Other key proteins we know to be involved in neurological conditions, including alpha-synuclein in Parkinson’s disease and beta-amyloid in Alzheimer’s disease, are controlled by very similar lncRNAs. This means we may have found the key to regulating the production of a whole range of proteins involved in brain function and the development of these devastating conditions.

“It’s early days but we hope that these exciting new insights will lead to the development of drugs that can keep tau and other proteins under control, and that these therapies could be life-changing for degenerative brain conditions that as yet, have no treatments to halt, let alone slow their progression.”

Other neurological conditions associated with the tau protein include corticobasal degeneration and progressive supranuclear palsy.

Professor de Silva said: “Genetic studies have previously shown that people who have a particular form of the tau gene - called H1 - are more likely to get Parkinson’s disease, corticobasal degeneration and progressive supranuclear palsy. We know that people with the H1 form of the gene produce more tau. We also know the lncRNA we’ve identified helps to limit tau production, and that studies using post-mortem brain tissue show this lncRNA may be reduced in people with Parkinson’s disease.

“So, if we can find a way to boost the levels of this lncRNA, we might be able to reduce the production of tau protein which could help to slow or stop the damage to cells inside the brain.”

He added: “That’s exactly what we are working on now. Specifically, we are developing a gene therapy to deliver this lncRNA to brain cells and we’re currently testing whether this approach can reduce tau levels in mice and other animal models. If it’s successful, we hope to take this approach forward to be developed as a new therapy that can one day be tested in people.”

Professor David Dexter, Associate Director of Research at Parkinson’s UK, said: “This important research provides fantastic new insights into how tau production is controlled inside brain cells, and presents an exciting new opportunity for developing therapies that target this. It’s especially exciting to see that similar mechanisms may be involved in controlling the production of many other key proteins implicated in other neurological conditions, as it suggests strategies targeting these mechanisms could be effective across many conditions.”

* Non-coding DNA: Our genome contains coding genes, the parts of our DNA that contain instructions for making proteins, the building blocks of our bodies. However, these coding genes make up only a small part of our genome - a mere 3% of the 3 billion letters (the nucleotides) of our genetic material. Until recently, the remainder of the genome (non-coding) was regarded as junk DNA, without known function. However, it is now clear that the DNA that lies in-between the coding genes is emerging as crucially important not only in human evolution but also in regulating function of cells and influencing the way coding genes produce proteins.