UCL student Aliza Ayaz has been appointed as a UN Youth Ambassador for the Sustainable Development Goals (SDGs) for her work on climate action. 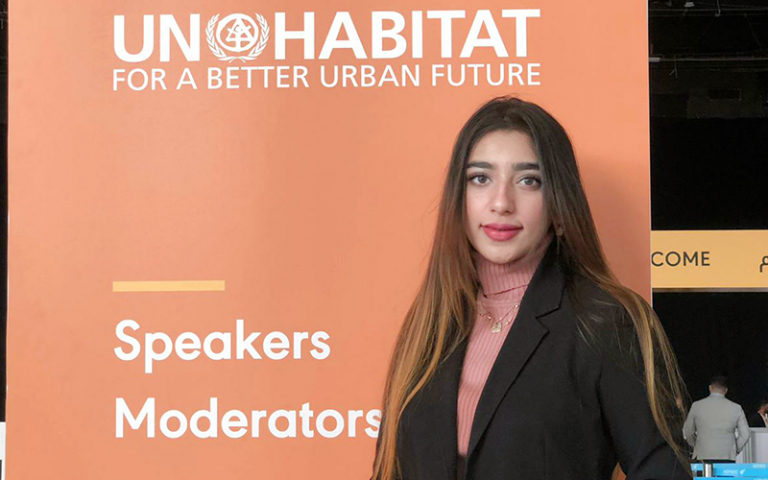 Currently studying for an MSc in Infectious Disease Epidemiology, Aliza says she is proud to be working for the UN, believing she is only the second young Pakistani woman to represent the UN in this way after activist and Nobel Prize laurate Malala Yousafzai.

Aliza's appointment follows on from her success as an advocate for action on climate change, as well as a number of other SDGs. In 2018, then a second year Population Health student, Aliza founded the Students’ Union UCL Climate Action Society, a network of almost 300 students, staff and alumni, which has helped organize nationwide action to encourage universities and corporations to move to carbon neutral business models.

A former spokesperson for Youth and Environment at the UK Parliament, Aliza is currently the House of Lords’ student representative on ‘Health & Environment’, and recently featured on a British Council webinar panel on the SDGs. She also spoke at the UN’s World Urban Forum in 2019.

Aliza will join ambassadors from around the world to work with the Secretary-General of the UN, Antonio Guterres, and through UN Habitat, UNEP and UNDP, which aim to foster youth leadership youth at a national, regional, and global level, including through exploring mechanisms for young people’s participation in political and economic processes.

The group is also tasked with providing perspectives, ideas and solutions that will help the UN to scale up climate action. Experienced in both advocacy and research, Aliza and her ambassador colleagues will work to document, preserve, and promote climate knowledge and environmental policy, meeting with influential stakeholders regionally across various countries to discuss what is needed to meet the SDGs by 2030.

The UN’s announcement of its new youth ambassadors marks an acknowledgement of the role young people have been playing in combating climate change as they look to their future. It comes after young climate change activists met with UN leaders last year to demand a greater role in global decision-making and planning processes to combat global warming.

Aliza (UCL Epidemiology & Public Health) said: “I am honoured to be taking on this important position at the UN at this crucial time in our planet’s history. I am so incredibly grateful for this opportunity and for the vibrant community around me also celebrating this achievement.

“While I’m not certain of where we go from here, I’m hopeful for a transformative 2021 defined by businesses and investors making the necessary steps to transition to a net zero world, deep carbon cuts, cheap and green renewable energy in every corner - and a belief that we all can and must be better than we are today.”

UN-Secretary General, Antonio Guterres, has also praised the bold leadership by young people on the front lines, acknowledging their contribution as critical to scaling up action to slow global warming.