£11m philanthropic investment in the history and ancient languages of Iraq

UCL has received a donation of more than £11m for research and teaching on the history, heritage and languages of Mesopotamia, the ancient ‘land between two rivers’ that is now home to modern day Iraq, Northern Syria and Eastern Turkey. 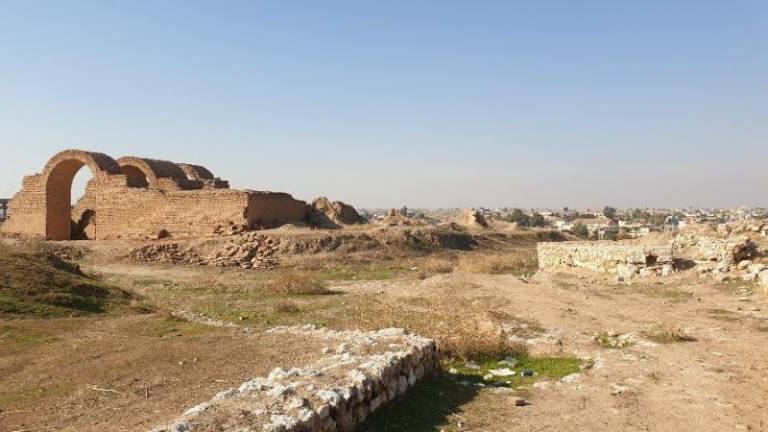 The gift will fund both Iraqi led research to create economic and social benefits for local communities and a dedicated new UK hub at UCL for Ancient Middle Eastern Languages.

It will build on the activities of the UCL led Nahrein Network, which takes a new approach to education and research on heritage, history and the humanities in Iraq and neighbouring countries.

The Network was formed to tackle significant challenges in the region: systematic exclusion from writing and remembering Middle Eastern history and the implications of massive population growth, both against a backdrop of endemic instability, poverty and youth unemployment.

It is funded by the UK Research and Innovation Arts and Humanities Research Council (UKRI AHRC) and the Global Challenges Research Fund (GCRF) until autumn 2021. The donation, from a philanthropist who has chosen to remain anonymous, will secure the Network’s future for the next ten years.

UCL’s Head of History Professor Eleanor Robson, said: “The cultures of this region pre-date those of Greece and Rome by thousands of years. Together with Egypt, they represent the crucial first half of world history but have only been the subject of modern academic study since the 19th century, most of it from a Western perspective.

“This outstandingly generous donation will help transcend barriers associated with a fragile, post-conflict state and ensure Iraqis can reclaim their ancient heritage as local history - with all the social, cultural, economic and educational benefits that can bring.”

Since 2014, the destruction of heritage sites throughout Syria and Iraq has received widespread publicity, with talk of a ‘race against time’ to preserve what remains.

International projects have invested millions in the documentation, digitisation, and conservation of threatened and damaged buildings and archaeological sites across the Middle East. However, only a few of these projects have focused on the interests and impact on the ground for local people in their communities. It is the longer term impact on them that is the priority for the Nahrein Network.

Professor Sasha Roseneil, who is Executive Dean of UCL Social and Historical Sciences and Professor of Interdisciplinary Social Science at UCL’s Institute of Advanced Studies, said:

"This unprecedented donation to the Department of History at UCL will not just support research and education on the culture, heritage and ancient languages of Iraq here in London but it will transform opportunities for researchers in Iraq. Building on long-standing collaborations between UCL and Iraqi universities, it will take these to a new level and will ensure that they contribute to the rebuilding of Iraq and its academic and cultural institutions. We are hugely grateful to the donor for supporting this element of UCL’s global engagement.”

UCL President & Provost Dr Michael Spence said: “This gift marks a seminal moment in the decolonisation of knowledge production in Iraq and other regions in the Global South. It’s a remarkable act of philanthropy that will prioritise local perspectives on Iraq’s rich history and aid the preservation of its antiquity for the benefit of post-conflict communities and generations who follow.

“UCL is honoured to be the recipient of such a visionary gift, which is a powerful example of the impact that philanthropy can have in fostering collaboration to address global problems.”

As well as Iraqi led research in Iraq and funding for Iraqi researchers in the UK, the donation will also fund the creation of an Associate Professorship in Ancient Middle Eastern Languages, to sit within UCL’s Greek and Latin department. This will ensure future generations of historians have access to the linguistic research, knowledge and skills vital to this area of study.

Dr Mehiyar Kathem, Research Associate (UCL History) and incoming Deputy Director of the Nahrein Network said: “This new funding will strengthen the work of Iraqi researchers and heritage experts to address the impact of decades of conflict, war and neglect. It will provide an important resource for Iraqi researchers, universities and civil society.

“The Nahrein Network supports research that explores the role of culture and heritage and its continuity and sustainability in Iraq today. Our objective is to work with Iraqi stakeholders, including cultural workers and activists, researchers, state authorities and other parts of Iraqi society with a view to the country's recovery.”

“The Nahrein Network has been a very timely enabler for realizing my visions and plans to carry out innovative interdisciplinary research and capacity building in digital cultural heritage and digital architecture in Iraq. These cutting-edge and promising research areas are barely undertaken, understood or even heard of  in the country. The Nahrein Network has also extended our university’s reach and networks, locally and internationally.”

Dr Jaafar Jotheri, Vice-Dean and Assistant Professor of Archaeology at the University of Al-Qadisiyah in Iraq and Nahrein Network Co-Investigator, said: "I see the Nahrein Network as a strategic programme in Iraq that comes at an important time. The Nahrein Network is, and will be, working on getting Iraqi heritage specialists, activists and officials all together to provide knowledge, protection and sustainable, long-term solutions to Iraq's heritage challenges.”

The Nahrein Network  fosters the sustainable development of antiquity, cultural heritage and the humanities through interdisciplinary research to enable universities, museums, and community groups to better serve local, post-conflict needs. It is based at UCL, Sulaimani Polytechnic University, Al-Qadisiyah University, and the Ashmolean Museum, Oxford. It also has many international partners and is currently funded for four years, 2017-21, by the UKRI Arts and Humanities Research Council and the Global Challenges Research Fund Network Plus scheme.