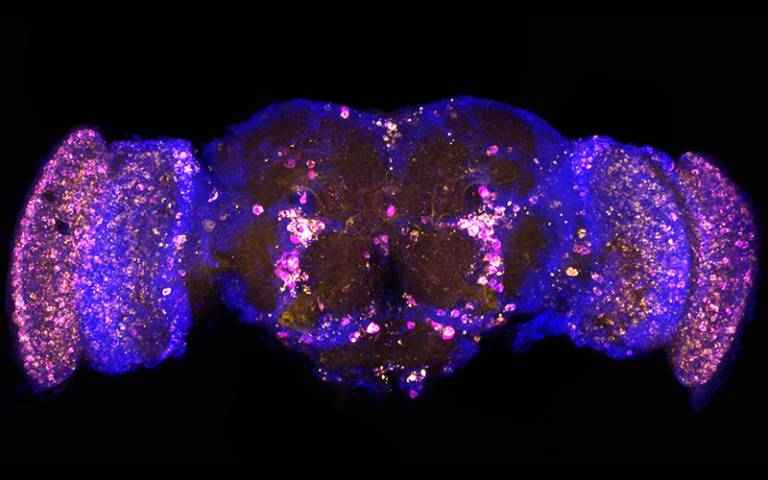 The researchers found that by modifying the levels of two different proteins that are active in two different types of brain cells, they could extend fruit fly lifespans by around 7-9% (close to an extra week), they report in PNAS.

The treatments also reduced the buildup of amyloid, the harmful brain proteins characteristic of Alzheimer’s disease, in flies that have been bred as models for researching the disease.

The research group at the UCL Institute of Healthy Ageing has previously found other ways to extend fruit fly lifespan by over 10%, or even by 48% when using a combination of three drugs (which are all approved for use in people for different medical conditions).* While smaller than the lifespan extensions in some other fruit fly studies, this latest research is notable for extending lifespan by only targeting one type of cell in the nervous system, rather than cells across the whole body. They have yet to investigate whether combining their new treatments with other methods could yield additional benefits.

In the latest study, the researchers were investigating ways to modify the insulin growth factor signalling pathway, which is being increasingly studied for its key role in the ageing process.

Co-lead author Dr Nathan Woodling (UCL Institute of Health Ageing, UCL Biosciences) said: “Insulin is very important to development, but it appears that we may have too much of it late in life. Insulin signalling likely developed through evolution due to its benefits early in life, in spite of its detrimental effects later in life.”

“Here, we were seeking to understand how ageing predisposes the brain to dementia, in order to one day find new ways to help us live well for longer.”

The team identified several new factors involved in insulin signalling that contribute to ageing in the fruit fly (Drosophila) brain, and that found that two proteins – which are comparable to proteins in human brains – act on two different cell types as part of the ageing process. The scientists developed two new genetic treatments modifying the quantities of proteins which control whether a gene is active or silent, one of which was targeted at neurons in fruit flies and the other of which targeted glial cells.

After finding that the treatments extended fruit fly lifespans, they tested the neuron treatment in flies that had been bred to produce amyloid, the protein believed to cause Alzheimer’s disease, and found that the treatment protected these flies’ brains from amyloid buildup while preserving behavioural function.

The study was funded by Wellcome, the Max Planck Society, and the Alzheimer’s Society.