A triple drug combination has been used to extend the lifespan of fruit flies by 48% in a new study led by UCL and the Max Planck Institute for Biology of Ageing. 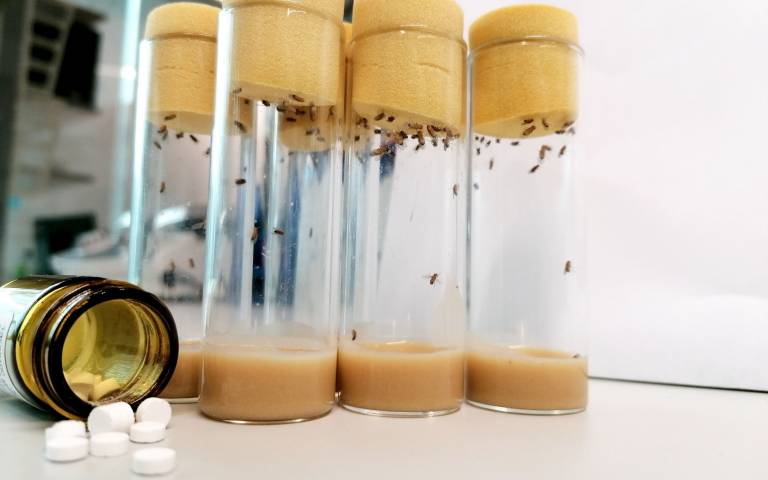 The three drugs are all already in use as medical treatments: lithium as a mood stabiliser, trametinib as a cancer treatment and rapamycin as an immune system regulator.

The findings, published in Proceedings of the National Academy of Sciences (PNAS), suggest that a combination drug treatment may one day be helpful at preventing age-related diseases in people.

“As life expectancies increase, we are also seeing an increase of age-related diseases so there is an urgent need to find ways to improve health in old age,” said the study’s co-lead author, Dr Jorge Castillo-Quan, who began the research at the UCL Institute of Healthy Ageing before moving to Joslin Diabetes Center, Harvard Medical School.

“Here, by studying fruit flies which age much more rapidly than people, we have found that a combination drug treatment targeting different cellular processes may be an effective way to slow down the ageing process.”

The researchers were building on previous studies finding that lithium, trametinib and rapamycin can each extend lifespan in fruit flies (Drosophila),* which is supported by other preliminary evidence in mice, worms, and cells, and observational findings in people.

The three drugs all act on different cellular signalling pathways that together form the nutrient sensing network, which is conserved across evolution from worms and flies all the way to humans. This network adjusts what the body is doing in response to changes in nutrient levels. The three drugs in question act on different proteins of this network to slow the ageing process and delay the onset of age-related death.

For the latest study, the researchers gave fruit flies doses of lithium, trametinib and rapamycin, separately and in combination. Each drug individually extended lifespan by an average of 11%, while pairing two drugs extended lifespan by roughly 30%. When the three drugs were combined, the fruit flies lived 48% longer than flies in a control group that were not given the treatment.

“Previous studies in fruit flies have achieved lifespan extensions of about 5-20%, so we found it was quite remarkable that this drug combination enabled them to live 48% longer,” Dr Castillo-Quan said.

The researchers found that in addition to acting on separate signalling pathways within the nutrient sensing network, the drugs also appear to complement each other to reduce side effects. Rapamycin has undesirable effects on fat metabolism, which can be similar to insulin resistance in people, but lithium appeared to cancel out this effect when the two drugs were given together.

The researchers will continue their research to better understand exactly how the drugs work in combination with each other, and hope to progress to experiments in more complex animals, such as mice, to gauge the effects on the entire body before eventually progressing to human trials.

Principal investigator, Professor Linda Partridge (UCL Institute of Health Ageing and Max Planck Institute for Biology of Ageing), said: “There is a growing body of evidence that polypills – pills that combine low doses of multiple pharmaceutical products – could be effective as a medication to prevent age-related diseases, given the complex nature of the ageing process. This may be possible by combining the drugs we’re investigating with other promising drugs, but there is a long way to go before we will be able to roll out effective treatments.”

“My research groups are working to understand the mechanism of the ageing process in order to find ways to help people stay healthy for longer. We are not trying to cheat death, but help people be healthy and disease-free in their final years,” she said.