Zubair Junjunia, a UCL alumnus and online entrepreneur, has been recognised with a Diana Legacy award for his groundbreaking work tackling inequalities in education. 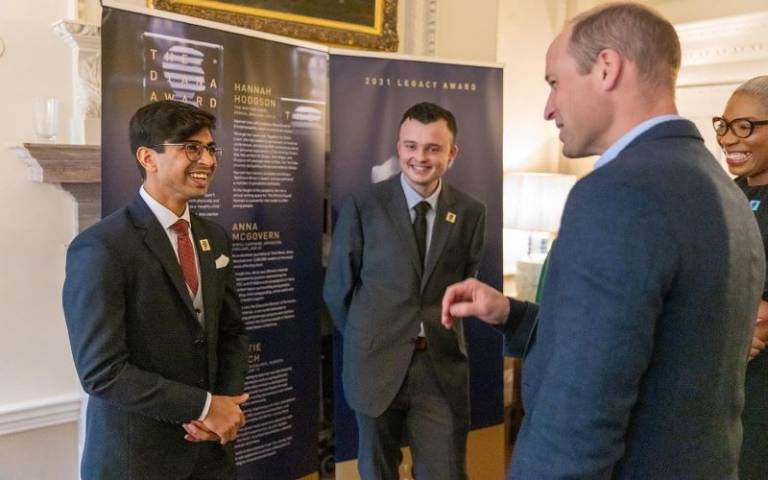 The mathematics graduate is one of just 20 young people globally to be recognised with a Diana Legacy Award. The award was introduced by The Diana Award charity in 2017 to celebrate the life of Diana, Princess of Wales, on the 20th anniversary of her death.

Zubair has received the award for his revolutionary revision notes platform ZNotes: supported by UCL’s Launch Programme, ZNotes aims to level the playing field for students all over the world, with access to free revision notes and online content.

Zubair was first recognised with a Diana Award in June 2021 and the Diana Legacy Award is a further recognition of his social and humanitarian efforts. Both awards are also backed by The Dukes of Cambridge and Sussex.

Commenting on the award, Zubair said: “It is both an incredible honour and opportunity to be one of the young people selected to continue Princess Diana’s legacy to create lasting social change. This award gives us an important platform that will help to amplify the reach of ZNotes even further and get our message out there with governments.

“Our ultimate goal is to ensure that equitable high-quality education is accessible to all young people, regardless of their geographical location or socioeconomic background.”

The alumnus founded ZNotes in 2014 to share revision notes after recognising that there was a disparity in the access students from around the world had to resources, advice and support when studying for their exams.

Then, while studying for a master’s in Mathematics at UCL between 2016 and 2020, he joined the UCL Launch programme to expand on his business idea and mission to empower young people to become global changemakers.

ZNotes now has hundreds of contributors and more than 3.5 million unique visitors worldwide.

Zubair said: “It was while studying in Saudi Arabia for my iGCSEs, that I started seeing these huge disparities and inequalities in education provision, even among the neighbouring schools.

“Some students had access to the very best teaching and private tutoring, while others were unable to afford even the basic textbooks.

“UCL has been a big part of my journey. I joined the UCL Launch programme in my second year, to evolve the ZNotes community, platform and branding. I learned a whole host of things, from the legal side, to financing. But more than anything it gave me the confidence to speak about what I was doing and share our ambitions. From there, things just happened.

“Moving forward, we envision working at government and NGO levels to advise and help implement this student-led approach to learning, as a way to develop and support educational systems around the world.”

Staff from UCL have also helped Zubair in obtaining an Innovator visa so he can continue growing his company in the UK.

Professor David Price, UCL Vice-Provost (Research, Innovation & Global Engagement) said: “We are delighted that Zubair has received this huge accolade for the work he is doing to tackle educational inequalities around the world.

“The Diana Legacy Award is reserved for a select group of young people who using their compassion, determination and agency to make positive lasting change. It is testament to the entrepreneurial culture we strive to develop at UCL, and to Zubair’s absolute commitment to his mission and work. Huge congratulations to him and to all the other recipients."

Zubair was invited to Kensington Palace on 1 December with the other UK winners to meet with Prince William. The event was then aired on BBC’s The One Show. He will receive his award on 9 December at Althorp House, Princess Diana’s childhood home.

The award winners will also benefit from workshops and mentoring with inspiring changemakers, organised by the charity, to upscale their impact even further.