UCL’s Portico building joined landmarks around the world in lighting up purple, in support of the International Paralympic Committee’s #WeThe15 campaign. 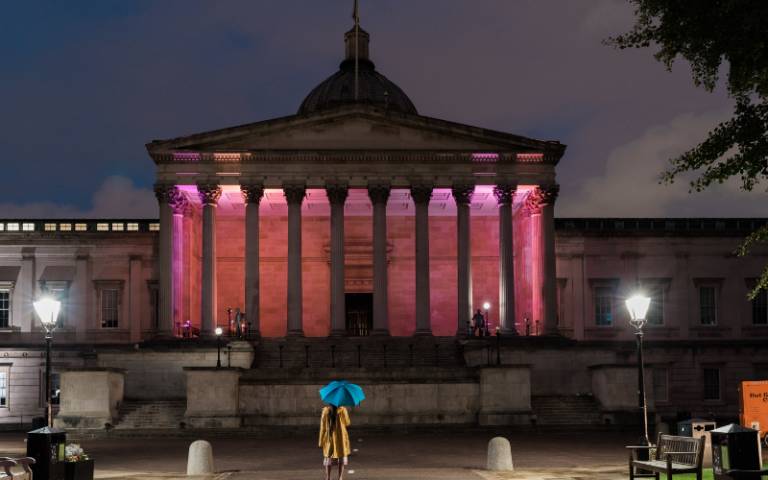 The Global Disability Innovation (GDI) Hub – hosted at UCL – is a key founding partner of the campaign.

The Portico joined buildings displaying purple lights – the international colour of disability – around the world, including the Empire State Building in New York City, Tokyo’s Skytree and the Coliseum in Rome. UK buildings include the London Olympic Stadium, the London Eye, Piccadilly Circus and Murrayfield.

The GDI Hub, the first World Health Organisation (WHO) Collaboration Centre on Assistive Technology (based out of UCL), is playing a key role in the ten-year #WeThe15 campaign, which champions inclusion for the 15% of the global population living with disabilities. The campaign will launch on the 19th, ahead of the Tokyo Paralympic Games, and will have dedicated slots at the opening and closing ceremonies with a call for vaccine equity for the world’s one billion disabled people, broadcast to over 200 million people across 140 nations.

The campaign is led by the International Paralympic Committee (IPC) and the International Disability Alliance (IDA), bringing together a coalition of 20 international organisations from the worlds of sport, human rights, policy, business, arts and entertainment to work with governments and the public to initiate change.

Businesses, cities and athletes will show their support for the movement by turning their social media purple and sharing the logo and campaign hashtag from the 19th.

The theme in the first year of the campaign will be access to assistive technology (AT), building on the work done by AT2030, a UK government-funded programme led by the GDI Hub which has reached more than 21 million people with access to AT in over 35 countries with 70 partners since 2018.

Through the Collaboration Centre, the GDI Hub’s work contributes to achieving the UN Sustainable Development Goals (SDGs) through demonstrating the human and economic value of disability innovation and AT, without which the SDGs couldn’t be achieved.

GDI Hub will also launch a product and policy accelerator to support #WeThe15 and develop ventures with a purpose of promoting the inclusion of the missing billion. From 2022 the campaign will focus on AT access for the 900m people who need it and currently don’t have it, ahead of the Winter Paralympics in Beijing.

Victoria Austin, CEO of the GDI Hub and Co-Director of the WHO Global Collaborating Centre on Assistive Technology at UCL, said: “London 2012 showed us what’s possible on disability inclusion. We set up GDI Hub to continue to drive disability innovation for a fairer world, based at UCL.

“Through our work, the value of disability innovation and assistive technology is undeniable, without which, the SDGs have no hope of being achieved, trillions of pounds will be lost to the economy and most importantly, the world’s disabled people will not achieve independence and freedom. We cannot give up, and it will be hard. But together, we can do hard things and never has it been more necessary to find our strength in each other – in all of our beautiful diversity.

Professor Cathy Holloway (UCL Computer Science), Academic Director of the GDI Hub and Co-Director of the WHO Global Collaborating Centre on Assistive Technology at UCL, said: “Achieving success of #WeThe15 will only be possible through measurable commitments and rapid advancement of technology.

“In UCL’s Computer Science department we know the power of big data sets and novel technology and have the expertise to advance both – we will be developing the infrastructure to help support #WeThe15 in the mission to make the world a fairer place for 15% of the world’s population. We are ready to work with tech ventures, disabled entrepreneurs, cities and countries – join us.”

The IPC and IDA will also team up with the Special Olympics, Invictus Games Foundation and the International Committee of Sports for the Deaf (Deaflympics) to work with athlete communities and use international sports events to further raise awareness of the issues facing people with disabilities around the world.

Other organisations supporting the campaign include the International Disability Alliance, UN Human Rights, UNESCO, the UN SDG Action Campaign and the European Commission.

The campaign is aligned with the UN 2030 Agenda for Sustainable Development and the Convention on the Rights of Persons with Disabilities.

Andrew Parsons, IPC President, said: “#WeThe15 aspires to be the biggest ever human rights movement for persons with disabilities and aims to put disability right at the heart of the inclusion agenda, alongside ethnicity, gender and sexual orientation.

“By uniting several leading international organisations and the world’s 1.2 billion persons with disabilities behind one common movement, we will make a tangible and well overdue difference for the planet’s largest marginalised group.”

UCL’s President & Provost, Dr Michael Spence, said: “We are privileged to host the GDI Hub at UCL and support the work it does in championing global disability innovation. The collaborative approach of #WeThe15 is key to ensuring that the one billion people living with disabilities around the world are no longer left behind, without access to assistive technology and facing discrimination. I’m delighted that we are joining the light up and I look forward to further supporting the GDI Hub in its work towards disability inclusion.”

The GDI Hub will be working with partners to call on cities internationally to meet with their disabled people's organisations and set gold, silver and bronze goals on disability inclusion before the Beijing Winter Paralympics in March 2022. GDI Hub and partners will also be calling on governments to reduce or remove tariffs on assistive technology, making it more accessible to those that need it around the world. Working with Loughborough University, Hogan Lovells and IPC, GDI Hub has brought the Paralympics to be screened for the first time in 49 countries in Africa, under the AT2030 UK Aid programme.