A national study involving UCL has deepened understanding of the symptoms, signs and outcomes of patients with a novel blood-clotting condition associated with the Oxford/AstraZeneca vaccine. 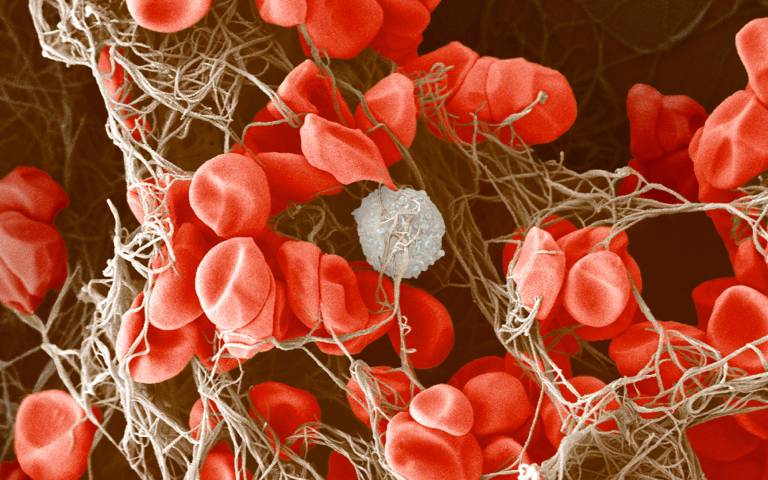 The rare condition, known as vaccine-induced immune thrombocytopenia and thrombosis (VITT), is characterised by a blockage of veins and a marked reduction of platelets, which are an important part of the blood clotting system. VITT was first identified in the UK by Professor Marie Scully (UCL Institute of Cardiovascular Science), also a Consultant Haematologist at UCLH, and Dr Will Lester from University Hospitals Birmingham NHS Foundation Trust.

The new research paper, published in the New England Journal of Medicine (NEJM), reports on the first 220 cases of definite and probable VITT in the UK.

The paper is based on cases of VITT presented by 182 consultant haematologists from 96 NHS Trusts, and builds on understanding about the condition outlined in an April 2021 NEJM paper led by Professor Scully which reported on 23 early cases of VITT.

Meanwhile, a study led by Dr Richard Perry (UCL Queen Square Institute of Neurology and UCLH) published in the Lancet earlier this month provided the most detailed observations so far of cases of cerebral venous thrombosis (CVT) caused by VITT. CVT is the commonest and severest manifestation of VITT.

In the latest paper, researchers found that the overall mortality rate of those presenting to hospitals with definite or probable VITT was 23%.

Almost all patients experienced the condition between five and 30 days after their first vaccination. There was no difference in incidence between the sexes, and no prior medical condition was seen more often than expected for the general population.

41% of patients had no previous medical diagnoses and 85% were less than 60 years old. Overall incidence in individuals under 50 was estimated to be 1 in 50,000 – consistent with reports from other countries.

Researchers said the optimal treatment was still uncertain, but that treatment approaches were being continually refined in real time. For instance, the introduction of the use of plasma exchange in the most severe cases has led to survival rates that were significantly better than would be predicted based on baseline characteristics.

In addition, the research provides further evidence that non-heparin-based blood thinners should be used to tackle blood clotting in cases of VITT, and that use of intravenous immunoglobin was associated with better outcomes.

Professor Scully said: “As a new condition we are still learning about how best to diagnose and manage VITT, but as time goes on, we have been able to refine our treatment approaches and improve rates of survival and chance of recovery. This continuous learning in real time has been made possible thanks to collaboration between colleagues across the UK.”

Dr Sue Pavord at Oxford University Hospitals (OUH) NHS Foundation Trust, lead author of the latest study, said: “We have worked relentlessly to understand and manage this new condition, so that the hugely successful vaccine roll out can continue, which is the most viable solution to the global pandemic.”