Professor Marie Scully (UCL Cardiovascular Science) is interviewed about her about her work identifying a new rare blood clotting syndrome linked to the AstraZeneca Covid-19 vaccine & established the correct test & treatments for patients, helping save lives. 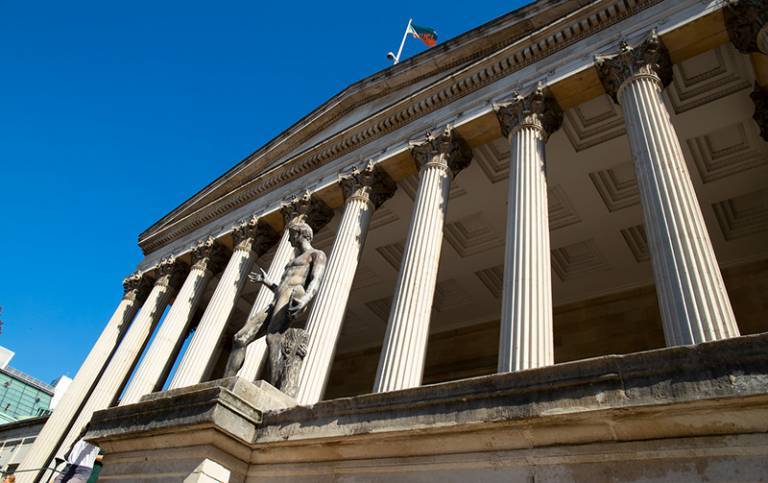 Marie Scully was alarmed and puzzled. “It didn’t make sense,” she said. The consultant haematologist at University College London hospital (UCLH) had seen patients with blood clots in the brain and low platelets before and, although it was unusual, she always knew why. But there was no reason for the condition of the young woman in her 30s she was treating in early March.

“Now when you have blood clots in the brain like that there’s always a cause, and it was difficult to pinpoint the cause,” said Prof Scully. “It didn’t fit our normal diagnostic boxes, let’s say. She was a young woman with cerebral venous sinus thrombosis, and she had a low platelet count.”

So began a medical detective story, which led to an inescapable, but difficult, conclusion. This was a rare side-effect of the Oxford/AstraZeneca Covid jab. The doctors’ dilemma would be huge: how to alert people to the symptoms and ensure they were diagnosed and properly treated without scaring them and undermining confidence in a potentially life-saving vaccine. Doctors, scientists and regulatory bodies all stress that the AstraZeneca vaccine has been shown to be safe and effective with low risks. A review by the Medicines and Healthcare products Regulatory Agency (MHRA) found that by 31 March 20.2m doses of the AstraZeneca vaccine had been given in the UK, with the overall risk of blood clots approximately four in one million.

There have been 79 blood-clotting cases alongside low levels of platelets in the UK, of whom 19 have died. There will be more cases, but thanks to the diagnostics test that Scully stumbled across, which has led to better treatment, it is hoped that the proportion of deaths will drop. As yet, nobody knows whether some people are more susceptible than others. Scully said it did appear to be more common in the younger age group. Researchers are looking at the under-60s, with a median age of mid-40. “So that is young, but that could change as we get more and more cases identified,” she said.

A single shot vaccine made by Johnson & Johnson is similar to that of AstraZeneca. Both use a harmless cold virus to deliver the vaccine. On Tuesday, the US recommended a pause in the rollout of the J&J vaccine because similar clotting conditions have been reported. The US Centers for Disease Control and Prevention and the Food and Drug Administration said they were investigating cases in six women. More than 6.8m doses have been given in the US.

In the UK, the young woman admitted in the first weekend of March had a severe headache, intolerance of light and vomiting. They gave her the standard treatment – a platelet transfusion and a small amount of blood-thinning drugs.

At first she seemed fine, but the platelet count did not increase. She had a routine ultrasound of her abdomen and the radiologist saw a blood clot in her liver. “That really was most unusual,” said Scully. Clots developed in the lungs as well and all of them got worse. The following Saturday afternoon she deteriorated rapidly and ended up intubated in intensive care.

A multidisciplinary team meeting was called, where radiology, liver, intensive care and haematology specialists came together to discuss this perplexing case. It looked like heparin-induced thrombocytopenia (HIT). That is a rare condition where the blood-thinning drug heparin triggers the immune system to produce antibodies that cause clots.

Prof Marcel Levi, at the time chief executive of UCLH and also a haematologist, was there. “I said ‘it’s really weird’. It looks like HIT, but obviously these patients didn’t get heparin. And then Marie thought, ‘well, let’s test for it’,” said Levi.

Scully cannot now remember why she thought it was a good idea to test for the PF4 antibody triggered by heparin. “Oh, I’d love to tell you why. I don’t know why I did it. Looking back, it makes no sense,” she said. But by then they had tried everything else.

“Everything had been ruled out. Every test was negative up to that point. She was progressing [then] deteriorating.”

She had had another patient in her 50s who had recently died from a brain condition and had low platelets. Scully asked the team to run her sample through the PF4 test as well. To her amazement, both tests came back positive. By then, she knew of another case in Birmingham being managed by a colleague, Dr Will Lester, who also ran a PF4 test. That also was positive.

It meant they had a diagnostic test – and that the medical world needed to know about it immediately. “The reason that they had to know – everybody – is because it was a massive switch in how you would treat patients. It wasn’t just diagnosing it. The normal lines of therapy had to almost be reversed,” she said.

Blood thinners are needed but not heparin. Platelet transfusions aggravate the clots, so they are out. There is an urgent need to damp down the immune system, so it does not produce the PF4 antibodies. Intravenous immunoglobulin, in short supply, has been authorised by the NHS for all these cases. With appropriate treatment and earlier diagnosis as people have become aware of the symptoms, lives are being saved.

The three patients had only one thing in common. They had all recently had the AstraZeneca vaccine. Scully tried not to make assumptions. “We use vaccines all our life, why would the AZ vaccine suddenly cause this situation?” she said.

But most of the cases in the UK and Europe have been in people who were fit and well and not on medications that could cause clotting. “The only thing they’ve had [in common] is the AZ vaccine.”

Levi alerted the government’s chief medical officer and chief scientific adviser, as well as the MHRA. “When Marie told me that she had actually confirmed this in all three patients and had a positive test, and when I heard from the German group who found apparently similar findings, I sent an email to Chris Whitty and Patrick Vallance and they immediately responded,” he said.

Levi wanted hospitals everywhere to know how to diagnose and treat this new condition. “We began to exchange information with some colleagues from the rest of Europe. The German group had quite a lot of experience with this particular condition. They had exactly the same information, but they were a little bit reluctant to share it with other people because they were in the process of getting it published in one of the scientific journals,” he said.

Levi felt it could not wait. “I discussed it with Marie. I said I’m just going to send an email to 200 of our colleagues around the world. I know them all, they know us, and we are going to say this is what we find.

“So we sent out an email to everyone, which was very well received. And now we have a sort of WhatsApp group of about 500 people that exchange information on a daily basis.”

A month on, Scully said she believes they are in a good place. A working group of leading haematologists meets daily. It has put out guidance to doctors for identifying and treating patients, who in turn report any new cases. “We get all the cases, discuss them, discuss treatment and then it’s immediately fed into the regulators, I believe it really is exemplary,” she said.

The important thing now is that they know how to diagnose it and they know how to treat it. People under the age of 30, at low risk from Covid itself, can choose to have an alternative vaccine. But nobody should say do not get vaccinated, said Scully.

“That is one message we cannot put across because it’s absolutely critical for public health,” she said.

This article originally appeared in The Guardian on 13 April 2021.