Most London pavements are not wide enough for social distancing

Two thirds of pavements in London are not wide enough for people to observe the government’s advice to stay two metres apart, according to new UCL analysis. 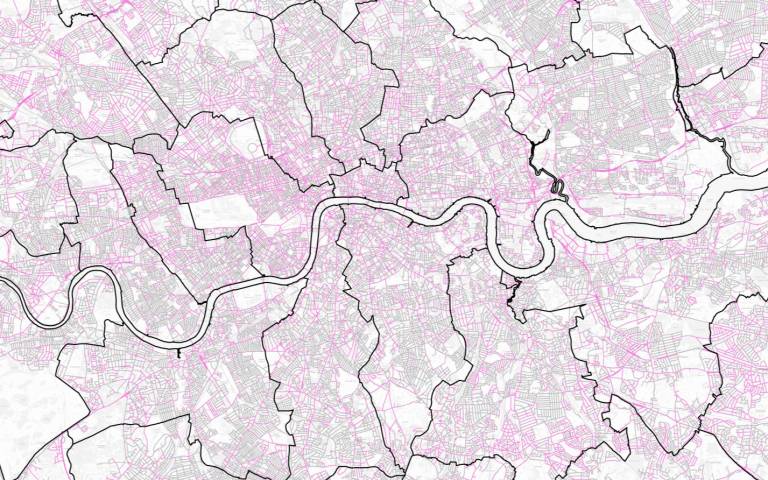 Looking at data for every street in Greater London, the researchers found that only 36% had pavements that were at least three metres wide – judged to be the minimum required for people to be able to keep their distance.

Dr Ashley Dhanani (The Bartlett School of Architecture, UCL), based at the Urban Dynamics Lab, said: “Most streets in London have pavements which are just over two metres wide – this is not enough room for people to pass each other and leave two metres’ distance between them, especially with obstacles such as bins, trees and lampposts. While some may opt to walk in the road, this is not possible for people with pushchairs or with mobility impairments.

“This research shows there is an urgent need to reallocate street space in London so everyone can use streets safely.

“A lack of space for walking and cycling is also a long-term problem. Using data is vital to make sure action is targeted in an effective and fair way, focusing on areas with the greatest need for space.”

Several cities around the world have adapted to the current low levels of traffic by creating more space for walking and cycling. Berlin, Bogota and Mexico City have created cycle lanes and Oakland and Vienna are closing streets to cars.

Of all London boroughs, the City of London had the highest percentage (51%) of streets with non-road spaces (e.g. pavements or grass verges) that totalled six metres across, while Hammersmith and Fulham (26%), Wandsworth (27%), Richmond upon Thames, Newham and Haringey (all 28%) had the lowest percentages.

Lucy Saunders, Director of Healthy Streets, said: "Social distancing recommendations have highlighted a longstanding issue which is that most of our pavements are simply not wide enough for people to easily use. This is an uncomfortable daily reality particularly for people with mobility impairments, those travelling with children and in groups.

“This new data clearly shows the urgent need for government to invest in more space for people walking."

Nicolas Palominos (The Bartlett Centre for Advanced Spatial Analysis, UCL): “The current situation raises important questions about the allocation of street space in relation to walking and cycling. Using new geocomputational techniques we can study in detail the critical design parameters for the reorganisation of street space and inform planning decisions like pavement-widening, car-free zones and cycleways, which are effective interventions to address the demands of social distancing."

The project received funding from the Engineering and Physical Sciences Research Council (EPSRC) and the Bartlett Innovation Fund and was a collaboration between UCL researchers and two organisations, Healthy Streets and Tranquil City. Researchers used data from the Ordnance Survey, collected in a working paper analysing street spaces in Greater London. The website for the project is here.

A map highlighting streets in Greater London with six metres or more of total non-road space.