Ahead of the UK’s departure from the EU, UCL hosted a high-profile panel of political, legal and constitutional experts to discuss the next stage of the Brexit process. 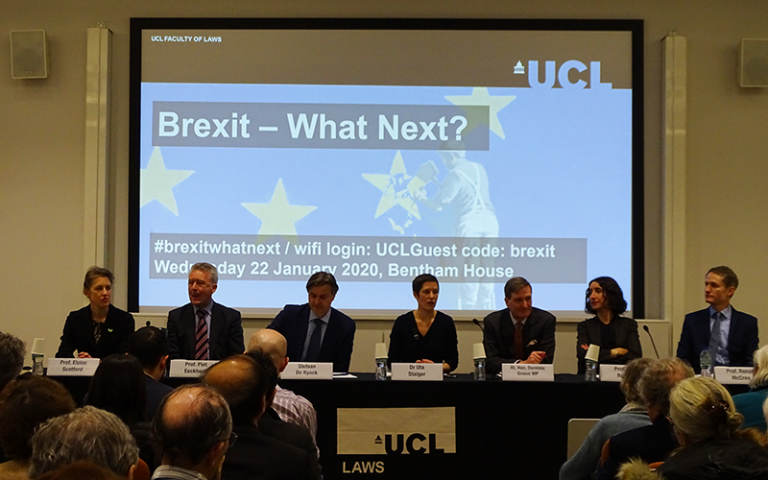 Academics from UCL Laws and the UCL Constitution Unit have made significant contributions to the Brexit debate, in areas ranging from trade relations, labour rights and environmental policy, to core constitutional issues. They have been involved in some of the crucial litigation in this area, including the European Court of Justice judgement on revoking Article 50.

The event, ‘Brexit: What Next?’ featured experts from UCL and the world of politics, to discuss the biggest issues likely to arise during the next stage of the Brexit process, as the UK leaves the EU on Friday January 31. The panel speakers were:

The panel discussed a range of points including the UK’s future relationship with the EU, whether the UK will leave the transition period on 31 December 2020, what the legal and political obstacles are for extending the transition period and how likely moves toward a united Ireland are in the near future.

Professor Eeckhout, a leading authority in EU law and international economic law, discussed the complexity of negotiating a trade agreement, the possibility of a no-deal Brexit and trading on WTO terms.

Professor Meg Russell, an expert on the House of Lords and a fellow with independent research initiative, UK in a Changing Europe, discussed the recent news that Parliament approved the Withdrawal Agreement Bill and removed the possibility to extend the transition period.

Chair of the event, Dr Uta Staiger, Executive Director of UCL European Institute, said: “The event took place with barely a week to go until the UK formally leaves the EU. The high turn-out and engaged discussion shows how much appetite there is, despite years of Brexit debate, to hear views from academics, politicians and policy people. We have to continue to create those opportunities.”

Professor Piet Eeckhout, Dean of UCL Faculty of Laws, said: “The UK’s departure from the EU is now imminent and minds are now focused on tackling longer term issues. The first priority will be negotiating a trade deal. We know we are leaving the customs union and the single market, and will be out of the EU legal system, but we await the detail on what kind of trade deal the UK envisions. Crucially time is short given that the Government has ruled out an extension of the transition period.”

The sold out event, held at UCL Laws on Wednesday January 22, attracted a large number of journalists and received media coverage in national and international news. Some of the coverage is provided in the links below.