Ancient fossil coral skeletons in the Drake Passage reveal that wind conditions influence ocean circulation and carbon dioxide release into the atmosphere, according to an international team involving UCL researchers. 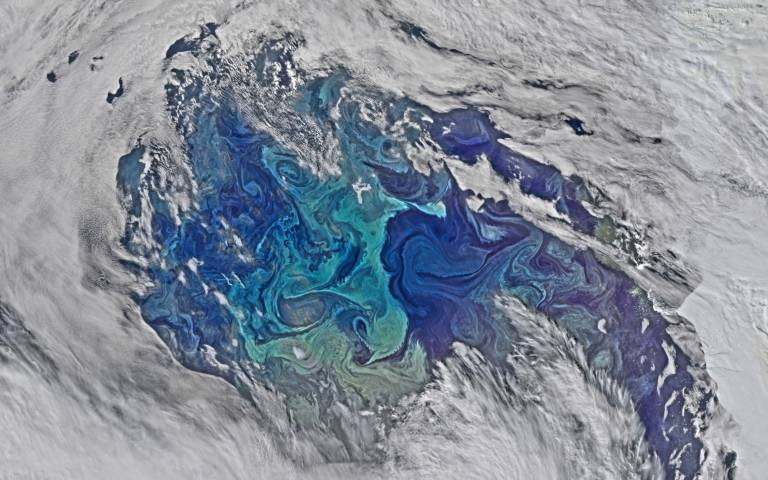 The discovery suggests that future climate change could lead to increases in the release of carbon dioxide (CO2) from deep waters of the Southern Ocean into the atmosphere.

The study, published in Proceedings of the National Academy of Sciences, analysed fossil coral skeletons to reveal that significant changes in deep water circulation occurred in the Drake Passage, a narrow strait between Antarctica and South America, around six to seven thousand years ago.

The sea encircling Antarctica acts as a huge mixer for water from all the ocean basins, so what happens there is critical for the global conveyor belt of ocean currents, which distributes heat, salt, nutrients, and CO2 over great distances.

It is one of the few places on Earth where water from great depths rises to the surface and at the same time surface water sinks. This circulation pattern influences the exchange of carbon dioxide between the ocean and the atmosphere.

The new study involving Dr David Wilson from UCL Earth Sciences and led by Dr Torben Struve from the University of Oldenburg, shows that this complex equilibrium of water masses reacts highly sensitively to wind conditions over the Southern Ocean, influencing CO2 levels in the atmosphere.

Previous studies by climate researchers had shown that there have been several shifts in the strong westerly winds blowing around Antarctica during the current interglacial period, which started around 11,700 years ago. These winds drive a cold ocean current that extends from the surface to the ocean floor, connecting the Atlantic, Indian and Pacific Oceans. Importantly, the winds also stimulate the upwelling of deep ocean waters towards the ocean surface.

To understand how the currents in the Southern Ocean reacted to changes in the atmosphere, the team studied fossils of cold-water corals collected from different water depths at three locations in the Drake Passage.

They measured isotopes of the trace element neodymium in the carbonate skeletons of the corals to record a chemical fingerprint of the water they grew in. Their analysis revealed an abrupt change in the chemical composition of the water around 7,000 years ago, which lasted for about 1000 years.

The team concluded that CO2-rich deep water from the Pacific Ocean penetrated the Drake Passage at that time, presumably driven by a northward shift of the Southern Hemisphere westerly winds.

“This was a surprising result for us. We hadn’t expected the Southern Ocean to react so sensitively during an interglacial period,” said Dr Struve.

Following the event, atmospheric CO2 levels, which had dropped slightly in the preceding 2000 years, began to rise once more. The scientists suspect that a key source for this phenomenon was the increased amount of CO2-rich Pacific deep water occupying the mid-depths of the Southern Ocean.

Dr Wilson (UCL Earth Sciences), said: “This is important because when deep waters upwell to the surface of the Southern Ocean, some of the stored CO2 is able to escape to the atmosphere. When the winds shifted back southwards once more and this upwelling increased, the Southern Ocean was preconditioned with more CO2 to release.”

It is not yet clear how rising global temperatures will affect the ocean currents encircling Antarctica; however, current climate scenarios indicate that the Southern Hemisphere westerly winds will move further south towards Antarctica. This scenario could lead to stronger mixing of water masses in the Southern Ocean and more upwelling, which the researchers suspect could result in increased CO2 release from the deep ocean.