One scan could replace multiple scans to streamline cancer assessment

Doctors could use just one scan to assess the spread of a patient’s cancer - instead of multiple scans which is current practice - according to research led by UCL and UCLH. 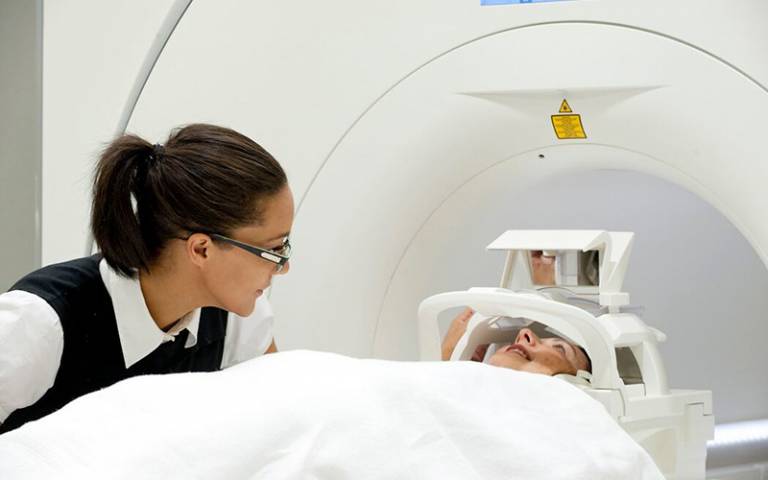 Cutting down on multiple scans could reduce treatment waiting times, save lives and reduce NHS costs, according to the two studies published today in The Lancet Respiratory Medicine and The Lancet Gastroenterology and Hepatology.

“In nearly all cases, additional scans were not necessary, and the time saved could lead to treatment starting sooner."

Once a patient has been diagnosed with cancer, doctors usually use a combination of scans such as CT, PET and MRI to assess how the cancer has spread, as different scans are more effective for different parts of the body. But using multiple scans can take several weeks, exposes patients to higher amounts of ionising radiation, delays the start of treatment and often adds to patient anxiety.

Today show that for patients with non-small cell lung cancer (NSCLC) and colorectal cancer, one whole-body MRI (WB-MRI) scan can work just as well as multiple scans at assessing cancer spread and leads to the same treatment decisions - but is quicker, cheaper, preferred by patients and involves less exposure to radiation.

The two 'Streamline' studies - the biggest of their kind to compare WB-MRI with standard scans - found that for both cancers, using one WB-MRI scan removed the need for additional scans for nearly all patients, and reduced the average time taken to assess patients by almost a week.

Using WB-MRI, NSCLC patients were fully assessed within an average of 13 days, compared to 19 days using multiple scans. For colorectal cancer, the difference was 8 days compared with 13 days.

And when asked, most patients said they would prefer assessment via WB-MRI.

In a small number of cases, doctors recommended additional scans following WB-MRI results (less than 20% and 7% for NSCLC and colorectal cancer patients respectively) - but researchers said overall WB-MRI should still be the preferred first scan for patients.

“Use of whole-body MRI can reduce the number of hospital appointments a patient has to attend, could expose patients to less radiation, and could reduce patient anxiety at what is already an incredibly stressful time,” Professor Taylor added.

Dr Neal Navani, lead clinician for lung cancer at UCLH and one of the study co-authors, said: “The earlier we start treating patients, the better their chance of survival. Using whole-body MRI to assess patients may be faster than using usual tests and therefore could save lives.”

NSCLC and colorectal cancer are the first and second leading causes of cancer-related death in the UK, responsible for over 35,000 and over 16,000 deaths each year respectively. NSCLC makes up around 87% of UK cases of lung cancer.

For the studies, 187 patients with NSCLC and 299 patients with colorectal cancer underwent multiple scans as standard. Separately, they underwent a WB-MRI scan overseen by NHS radiologists who did not communicate with doctors carrying out the standard scans until the first treatment decision had been made. Working with statistician Dr Sue Mallett from Birmingham, the trial used an innovative design to record the number of scans patients underwent, and captured their influence on treatment decisions made by doctors in real time.

No significant difference was found in the accuracy of WB-MRI compared with standard scans in assessing cancer spread - or in the treatment recommended as a result.

Researchers said there are drawbacks to using WB-MRI, saying some patients may experience claustrophobia in the longer, tube-shaped whole body scanner, compared with the doughnut shape of other scanners - and WB-MRI can take longer than any other individual CT, PET or MRI scan. Researchers said standard scans could still be offered to patients who would prefer them.

“Our trial results show that the NHS should be investing in MRI scanners and training radiologists on interpreting WB-MRI, so that we can reap the benefits of using whole-body MRI in the NHS,” Professor Taylor said.

Professor Hywel Williams, Director of the National Institute for Health Research’s Health Technology Assessment (HTA) Programme, which funded the study, said: “These are promising results which suggest that just one whole body MRI scan is as good as multiple scans for different body sites for informing treatment decisions. The process is also quicker and preferred by patients. If implemented widely, such a strategy could reduce waiting times for patients to start treatment for two of the deadliest forms of cancer.”