Adding canned laughter to the end of a punchline increases how funny we find a joke, but not as much as real laughter, finds a new UCL-led study. 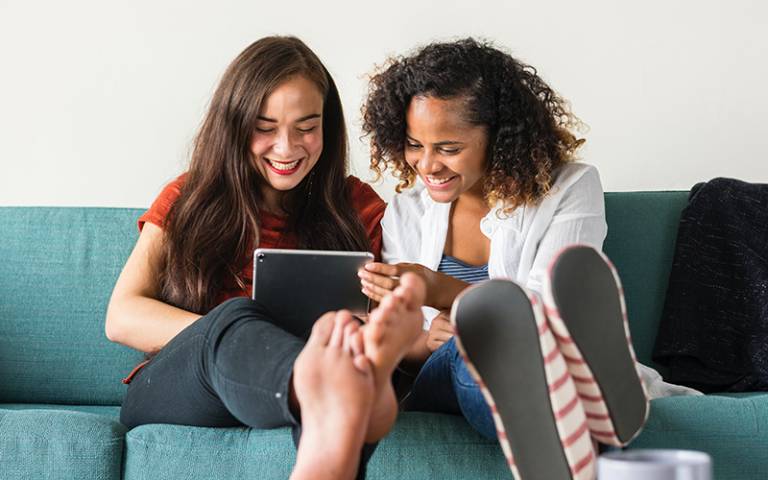 The research, published in Current Biology, looked to establish whether the presence and intensity of laughter increased our perception of whether or not a joke was funny, or how funny it was.

In the study, 40 groan worthy ‘dad jokes’ were given a baseline humour rating of between one (not funny) and seven (hilarious). A professional comedian then recorded each of the jokes, and two versions were created adding short canned (or posed) laughter and short spontaneous (or real) laughter.

Researchers, based at the UCL Institute of Cognitive Neuroscience, then tested both versions of the jokes on two distinct participant groups: neurotypical and autistic.

Laughter may be processed differently in autism: typically developing children’s enjoyment of cartoons is enhanced by laughter tracks, watching with another or simulating a smile; in contrast autistic children’s enjoyment is not significantly modulated by such manipulations.

Commenting on the findings, lead author, Professor Sophie Scott (UCL Institute of Cognitive Neuroscience), said: “What this study shows is that adding laughter to a joke, increases the humour value, no matter how funny or unfunny the joke is.

“It also suggests we respond much better to spontaneous genuine laughter, rather than posed or canned laughter, showing the inherent human joy and value of a natural response.”

The addition of laughter increased how funny the jokes were perceived to be.

There was a significant difference between the baseline ratings and the joke/laughter ratings in neurotypical adults, irrespective of the type of laughter.

The increase in humour was tempered by the kind of laughter; the addition of spontaneous laughs led to jokes being rated as funnier than with the addition of posed laughs.

There was no difference between neurotypical and autistic adult participants in the effect the different types of laughter had on the ratings of the jokes.

Both groups gave higher funniness ratings for jokes paired with spontaneous laughter than with posed laughter.

The only difference between the groups was that those with autism gave all the 40 dad jokes an increased funniness rating, when laughter was added. This may be because neurotypical adults were more aware these ‘dad jokes’ are considered childish and uncool, whereas autistic adults are more open to such jokes.

Professor Scott added: “Our data suggest that laughter may also influence how funny the comedy is perceived to be, and that people with autism are equally sensitive to this effect.

“This might suggest that comedy and laughter are more accessible to people with autism than typically considered to be.”

Five jokes from the study:

Professor Scott added: “Historically, TV and radio programmes were always recorded in front of a live studio audience: this allowed those watching and listening to feel part of the performance.

“However, as the audience reaction was natural, certain ‘comedy’ programmes, which weren’t overtly funny wouldn’t get a long laugh, so TV and radio producers increasingly added canned laughter to prompt an audience reaction.

“This research shows that while canned laughter does elevate the humour of a comedy, adding real laughter would get a better response. This has been adopted in shows like Friends, which are recorded in front of an audience, with the real laughter amplified during editing for particular jokes that had been well received.”