UK built Mars rover gets the gift of sight

The UCL-designed and built panoramic camera system which will allow the UK-built Rosalind Franklin Mars rover to examine the Red Planet and search for signs of life has been installed. 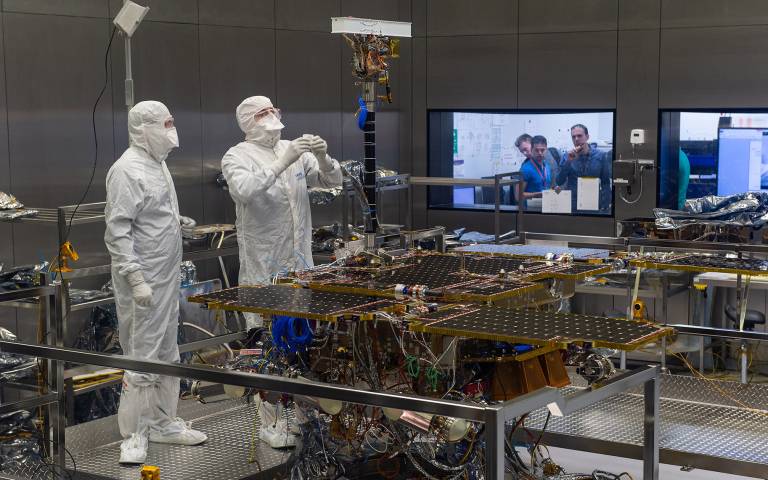 PanCam was developed in Britain by a dedicated team of scientists and engineers at the UCL Mullard Space Science Laboratory.

The ‘PanCam’ apparatus is the scientific ‘eyes’ of the rover, which will give scientists a view of the Martian terrain and geological features so that they can drive the rover named after the British scientist Rosalind Franklin who co-discovered the structure of DNA.

The rover will be able to observe Martian atmospheric phenomena like its fierce dust storms that cover the entire planet lasting for many months and water in the atmosphere.

Professor Andrew Coates, PanCam Principal Investigator from the UCL Mullard Space Science Laboratory, said: “PanCam is the most sophisticated scientific camera system ever to be sent to the surface of Mars and is part of a mission that has the best chance yet of discovering life beyond Earth.

“Our wide angle cameras will do more than is possible with human eyes by identifying water-rich minerals and studying water and dust in the atmosphere. They also will map the rover’s surrounding in 3D, the High Resolution Camera will add rock texture and detail, and can watch for hazards underneath the rover.

“Our engineering team has dedicated more than fifteen years to delivering PanCam, and it’s thrilling to see all their hard work now being added to this amazing rover. We proposed the instrument in 2003, merged competing teams, designed, built, tested and calibrated the instrument with a fantastic UK and international team. Now we are ready to go. Next stop Mars.”

The UK is taking a leading role in the Rosalind Franklin Mars rover, part of the European Space Agency’s (ESA) ExoMars mission to examine the geological environment on Mars, which is 140 million miles on average away from Earth, and search for evidence of environments that may have once, and perhaps could still support life.

Jo Johnson, Science Minister said: “The UK is determined to play a leading role in the new space age, with our innovative companies and world-class universities exploring the Solar System and bringing the benefits of scientific discoveries back to Earth.

“The supremely complex Rosalind Franklin Mars rover is a testament to the strength of the UK space industry, our scientific experts, commitment to the European Space Agency and our support for international collaborations in research.”

With funding and support from the UK Space Agency and European Space Agency (ESA), PanCam was developed in Britain by scientists from UCL’s Mullard Space Science Laboratory (MSSL), working with the University of Aberystwyth and dozens of other experts across the UK in partnership with colleagues in Switzerland, Germany, Austria and scientists from nine nations.

The camera system was fitted to the rover at Airbus Defence and Space in Stevenage, Hertfordshire, which is building Rosalind Franklin.

UK scientists from the University of Leicester and Teledyne e2v are also working on the rover’s Raman Spectrometer, a powerful tool for the identification and characterisation of Martian minerals. The UK Science and Technology Facilities Council is providing some of the electronics, including the data processing board.

Colin Paynter, Managing Director of Airbus Defence and Space UK said: “ExoMars is Europe’s latest flagship space mission and Airbus is at the heart of it.

“Today’s installation in Stevenage of the powerful PanCam which will not only provide 3D images of the Martian landscape but also data on the atmosphere is a major milestone as we move forward to the rover being ready to fly in July 2020.”

The UK Space Agency is the second largest European contributor to the ESA-Roscosmos ExoMars mission, having invested €287 million in the mission and £14 million on the instruments. This, in addition to successful negotiations with ESA, secured key mission contracts for the UK space sector.

Later this month Rosalind Franklin will begin its long journey to Mars - leaving the UK for testing in Toulouse before launching to the red planet next summer (2020).

The UK is a leading member of ESA. In June the UK led Comet Interceptor mission, proposed and led by UCL researchers, was selected by ESA. This mission will send a spacecraft to chase down, observe and study a comet which has never previously encountered the inner Solar System giving us vital information about the conditions of the early Solar System and understand its formation.

The Government’s modern Industrial Strategy is backing businesses to succeed by increasing investment in science, because countries that invest in ideas create more opportunities for business. The ambition is for the UK be the world’s most innovative economy – and the development of the ExoMars rover for the UK is a part of this ambition.