New blood test to detect liver damage in under an hour

A quick and robust blood test that can detect liver damage before symptoms appear has been designed and verified using clinical samples by a team from UCL and University of Massachusetts. 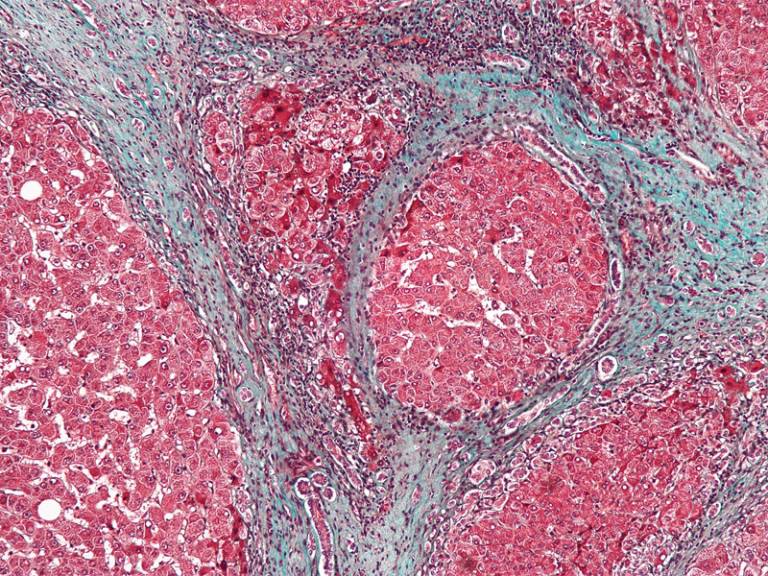 The researchers say the test could address a huge need for early detection of liver disease as it distinguishes between samples taken from healthy individuals and those with varying degrees of liver damage.

A study, published today in Advanced Materials, describes the new method of detecting liver fibrosis, the first stage of liver scarring that leads to fatal liver disease if left unchecked, from a blood sample in 30-45 minutes.

"Liver disease is the third biggest cause of premature mortality in the UK, and one of the only leading causes of death that's on the increase.* The major problem is that it's asymptomatic, meaning that it goes unnoticed until late stages of the disease when the damage is irreversible," said co-lead author Professor William Rosenberg (UCL Institute for Liver & Digestive Health).

Almost half of adults in Western countries face an elevated risk of liver disease due to overweight or heavy drinking but only a minority will develop serious liver damage.**

"We hope that our new test could be used on a routine basis in GP surgeries and hospital clinics to screen people who face an elevated risk of liver disease, but don't yet show signs of liver damage to identify those with serious fibrosis, so that they can access treatment before it's too late. This may open the door to a cost-effective regular screening programme thanks to its simplicity, low cost and robustness," he said.

Researchers at the University of Massachusetts designed a sensor that uses large molecules called polymers, coated with fluorescent dyes that bind to blood proteins based on their chemical properties. The fluorescent dyes change in brightness and colour, yielding a different pattern of fluorescence depending on the protein composition of the blood sample.

The team at UCL tested the sensor by comparing results from small blood samples (equivalent to finger-prick checks) from 65 people, in three balanced groups of healthy patients and those with early-stage and late-stage fibrosis.

The groups were determined using the Enhanced Liver Fibrosis (ELF) test which is the existing benchmark for liver fibrosis detection that requires samples to be sent away to a lab for analysis.***

They found that the sensor could identify different patterns of protein levels in the blood serum of people in the three groups.

"By comparing the different samples, the sensor array identified a 'fingerprint' of liver damage. This method is known as a chemical nose, as it can recognise the difference between healthy and unhealthy blood samples without relying on known disease markers," said co-lead author Dr William Peveler, who completed the research in the UCL Chemistry department before moving to the University of Glasgow.

"It's the first time this approach has been validated in something as complex as blood, to detect something as important as liver disease," he added.

The test could distinguish fibrotic samples from healthy samples 80% of the time, reaching the standard threshold of clinical relevance on a widely-used metric, and comparable to existing methods of diagnosing and monitoring fibrosis.

The test distinguished between mild-moderate fibrosis and severe fibrosis 60% of the time. As this is only the first report of its use, the researchers are hopeful they can refine it to be more effective, and they will be testing it on much larger groups of patients.

"We are developing the test from being a lab-based test to a point-of-care diagnostic and monitoring device that can be used in GP surgeries. This could take several more years but is particularly exciting as the technology has the potential to help millions of people access earlier care to prevent fatal liver disease," added Dr Peveler.

The sensing strategy uses a 'signature'-based approach that is highly versatile. "A key feature of this sensing strategy is that it is not disease-specific, as it is applicable to a wide spectrum of conditions, which opens up the possibility of diagnostic systems that can track health status, providing both disease detection and the monitoring of wellness," said co-lead author Professor Vincent Rotello (University of Massachusetts Amherst).