New evidence on the origins of people buried at Stonehenge 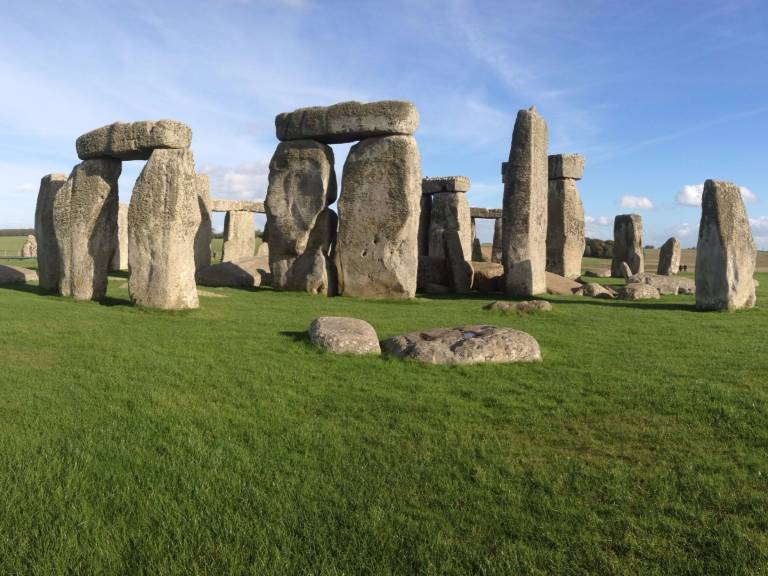 The study, published in Nature Scientific Reports, suggests that a number of people buried at the Wessex site had moved with and likely transported the bluestones, which were sourced from the Preseli Mountains in west Wales and used in the early construction of Stonehenge.

While there has been much speculation as to how and why Stonehenge was built, the question of 'who' built it has received far less attention. Part of the reason was that many of the human remains were cremated, and so it was difficult to extract much useful information from them.

Now scientists from Oxford and Belgium have made a breakthrough by analysing 25 of the burials that were excavated in 2008 by a team led by Professor Mike Parker Pearson (UCL Institute of Archaeology).

Many of the burials date to around 3000 BC, when Stonehenge was first built. Professor Parker Pearson and other experts have discovered that the Welsh bluestones were erected at this time, to form a 90m-diameter circle around Stonehenge known as the Aubrey Holes. Only 500 years later were the large sarsen stones erected.

Using chemical isotope analysis in addition to radiocarbon dating, the scientists in this new study found that at least 10 of the 25 people did not live near Stonehenge.

Instead, the researchers found that the highest strontium isotope ratios in the remains were consistent with living in western Britain, a region that includes west Wales - the known source of Stonehenge's bluestones. Although strontium isotope ratios alone cannot distinguish between places with similar values, this connection suggests west Wales as the most likely origin of at least some of these people.

The results emphasise the importance of inter-regional connections involving the movement of both materials and people in the construction and use of Stonehenge, providing rare insight into the large scale of contacts and exchanges in the Neolithic period, as early as 5,000 years ago.

Professor Parker Pearson said: "This is a really exciting discovery because it shows how far some of the Stonehenge people travelled. But what's really fascinating is that this date of around 3000 BC coincides with our radiocarbon dates for quarrying at the bluestone outcrops in the Preseli hills of Pembrokeshire. Some of the people buried at Stonehenge might have even been involved in moving the stones - a journey of more than 180 miles."

Dr Christophe Snoeck, lead author (School of Archaeology at Oxford and Vrije Universiteit Brussel), said: "The recent discovery that some biological information survives the high temperatures reached during cremation (up to 1000 degrees Celsius) offered us the exciting possibility to finally study the origin of those buried at Stonehenge."

PhD student Christie Willis (UCL Institute of Archaeology), who was the project osteologist that excavated and analysed the cremated human remains from Stonehenge, said:  "This new methodology is exciting as it can be applied to other archaeological sites in order to understand prehistoric mobility patterns and dietary consumption from cremation deposits across Britain."