UCL and Google host women and the Industrial Strategy event

Women and the economy would benefit from a mission-oriented approach to industrial policy that focused on concrete problems in areas of sustainability and care, said Professor Mariana Mazzucato, Director of the 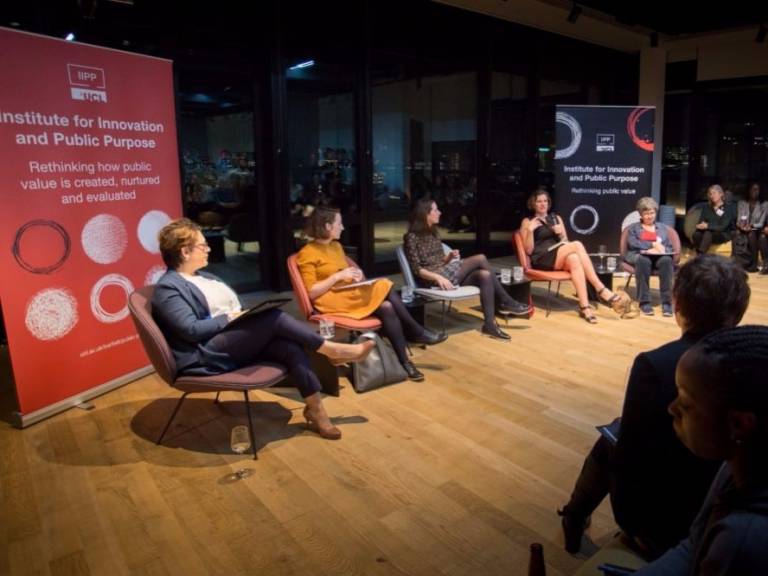 ucl.ac.uk/bartlett/public-purpose/" target="_blank">UCL Institute for Innovation and Public Purpose (UCL IIPP), speaking at an event on women and the Industrial Strategy.

Professor Mazzucato spoke of the exciting come-back of industrial strategy "after years of being a near blasphemy" and the need to use this window of opportunity, not for handouts to sectors, but to focus public and private investments around concrete "missions" addressing challenges in areas of sustainability and care. Missions, according to Professor Mazzucato, are broader than sectors, enabling multiple sectors to interact in new ways. For example, care could benefit from innovations in how we think about housing, health and nutrition.

Furthermore, she argued a strategic investment agenda around "green" and "care" can help to "crowd in" business investment. She pointed out that the era of big data could enable not only profit-led enterprise such as personalised medicine, but also innovations in the public sector and welfare provision.

Katie O'Donovan spoke about Google's ambitious plans on its digital agenda and how to use them to transform education and community participation.

Kate Bell questioned what focus the Industrial Strategy would have on low paid sectors that disproportionately employ women, such as care and retail. She highlighted figures showing that one in four of all female workers in the UK are now classified as being on low pay compared to one in seven male workers.

Professor Himmelweit made the case for understanding care as vital social infrastructure. She queried whether the Industrial Strategy be used to steer more investment towards care and change the dynamic so that those working in the sector could feel proud of their jobs.

Rannia Leontaridi reviewed the five pillars of the government's Industrial Strategy and said that the White Paper would be "the beginning of a big conversation" about transforming the economy.

Speaking before the event, Professor Mazzucato said, "the UK economy continues to be consumption led, with ratios of private debt to disposable income being back at record levels. As the UK debates its post-Brexit future, the need for investment is more important than ever. We need to discuss not only the rate of growth but its direction-and how a revived industrial policy, driven by clear missions, can set that direction."

"Women and the Industrial Strategy: the missing XX Factor" was hosted by Google and UCL IIPP on November 1 2017. The panel discussion was followed by a Q and A session with an audience of policymakers, officials, academics, think tank employees, business leaders and philanthropists. The UCL IIPP was launched on October 12th, and its impact on industrial strategy can be viewed here.