A team involving UCL scientists has developed a new device that could revolutionise our understanding of the brain by allowing researchers to map the activity of complex neural networks that control behaviour and decision making, in a way never before possible. 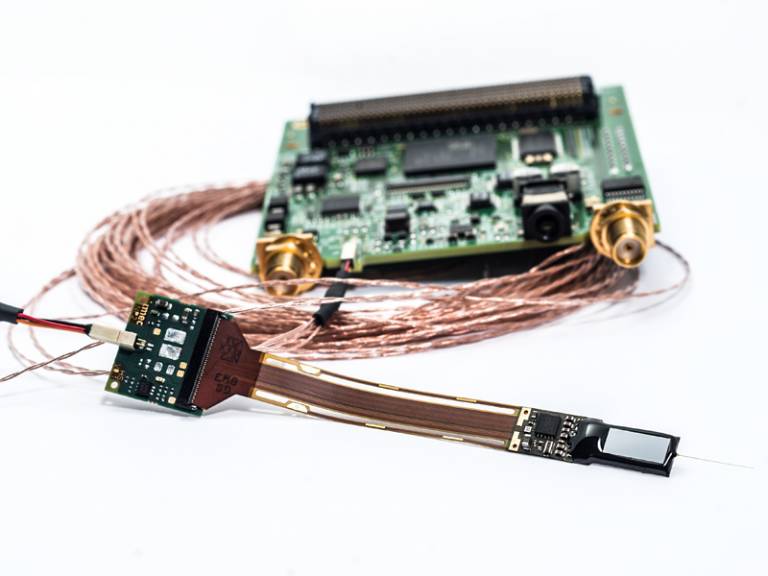 The Neuropixels probes are described in a paper published today in Nature.

Neuropixels - tiny silicon probes thinner than a human hair - can simultaneously record the activity of hundreds of neurons across multiple different brain regions in mice and rats. Existing technologies can only provide detailed data on very small areas of the brain, limiting our understanding of how responses in different parts of the brain coordinate to perform complex behaviours.

"To understand the brain we need to understand how a lot of neurons spread all over the brain work together. Until recently, it was possible to measure the activity of individual neurons within a specific spot in the brain or to reveal larger, regional patterns of activity-but not to do both at the same time," said co-author Professor Matteo Carandini (UCL Institute of Ophthalmology).

The new probes will allow scientists to understand the brain at a level of detail and at a scale that previously seemed impossible.

This new approach may eventually allow researchers to understand how disorders like depression or Alzheimer's can alter the neural circuits in our brain and could lead to new ways of treating these diseases.

In 2018, Neuropixels will be available at cost price to neuroscientists across the globe. There are currently around 400 prototypes in testing at research centres worldwide. Leading neuroscientists are already using them in their work to uncover how complex networks of brain cells support our ability to learn and make decisions.

Current recording devices are dependent on wire electrodes that limit the number that can be simultaneously placed in the brain; they typically have no more than a few dozen sensors. The new silicon probes have 960 recording sites distributed across large parts of the brain, enabling researchers to record from more neurons simultaneously in a single experiment than ever before.

The tiny super-sensitive electrodes on the Neuropixels probes can record the activity of hundreds of individual neurons from multiple brain regions, in real time. This will give scientists a much clearer picture of how different parts of the brain work together to process information. It could help researchers better understand how decisions are made and how emotion is regulated.

Neuroscientists use the mouse and rat brain as models for the human brain, as a lot of the structure and connectivity that exists in human brains also exists in rodents, at a smaller scale.

The probes were developed by an international team funded by $5.5 million from the Howard Hughes Medical Institute (HHMI), the Allen Institute for Brain Science, the Gatsby Charitable Foundation and Wellcome. Scientists at HHMI's Janelia Research Campus, the Allen Institute and UCL worked with engineers at nanotechnology company imec to build and test the probes.

The Neuropixels probes are 10mm long (roughly the same size as a mouse or rat brain) and 70x20µm wide, with 100 recording sites per mm.  The probe automatically transforms the electrical signals it detects into digital data ready for computational analysis. Researchers at UCL have developed new data analysis methods to transform that data into meaningful information about the activity of individual brain cells.

"These probes are a game changer. If you place them appropriately, you can really study how different parts of the brain work together at the neuronal level," Professor Carandini said.

Dr Timothy Harris (HHMI's Janelia Research Campus), leader of the Neuropixels collaboration said: "Every action and decision you take involves the interactions of millions of neurons spread across your brain. This new technology enables us to detect the activity of large numbers of neurons from multiple brain regions with much less difficulty. I believe they will be transformational and will greatly accelerate the pace of neuroscience research."

Dr Andrew Welchman, Wellcome's Head of Neuroscience and Mental Health, said: "This is a significant step on the path to understanding how the brain works. The history of computing shows how small silicon circuits can revolutionise how we tackle hard problems. To give a basic analogy, these probes move us from the era of small black and white TV sets, to large, high-resolution flat screen displays. Neuropixel probes will change what we know and even how we think about the brain. We still have a long way to go in uncovering the brain's mysteries, but this new technology is an important development."

In the Nature paper, researchers describe how the Neuropixels work. They explain how they used two Neuropixels probes to simultaneously record more than 700 well-isolated single neurons from five brain structures in a mouse. The researchers have also shown that the probes can be used in long-duration experiments with freely moving animals, in experiments with mice lasting up to 150 days. Long-term experiments enable researchers to study changes in the brain resulting from development, experience and learning, as well as the effects of neurodegenerative processes in disease.