Children with bedroom TVs at significantly higher risk of being overweight

A UCL-led study of over 12,000 young children in the UK has revealed that 11-year-olds who had TVs in their bedroom at age 7 had a significantly higher body mass (BMI) and fat mass (FMI) and were more likely to be overweight compared to children who did not have a bedroom TV. 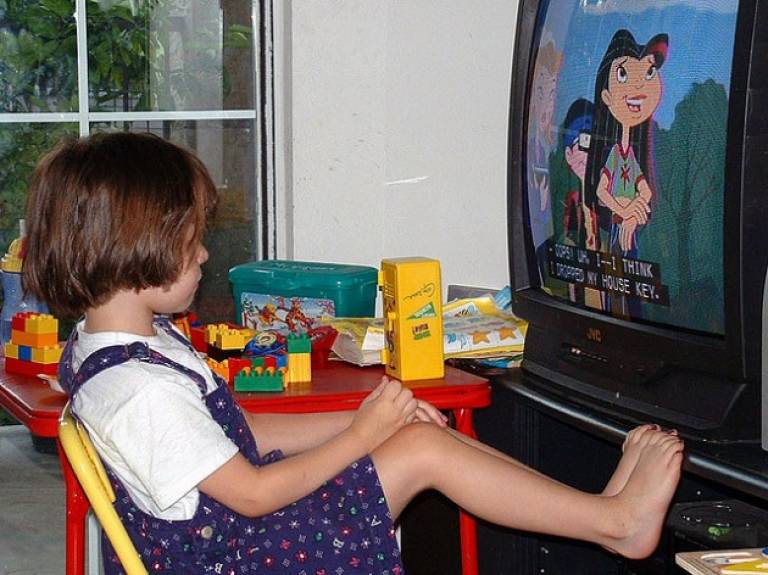 Girls who had a TV in their bedroom at age 7 were at an approximately 30% higher risk of being overweight at age 11 compared to children who did not have a TV in their bedroom, and for boys the risk was increased by about 20%.  The study, published today in the International Journal of Obesity, took a range of other obesity-linked factors into consideration, such as household income, mothers' education, breastfeeding duration, physical activity and irregular bedtimes.  Mothers' BMI was also taken into account to represent the overall food environment in the household as well as potential genetic influences. In addition, children's BMI at age 3 was included to minimise the possibility of reverse causation - the possibility that being overweight in the first place leads to spending more time in front of a screen.

Dr Anja Heilmann (UCL Institute of Epidemiology & Health Care) said, "Childhood obesity in the UK is a major public health problem. In England, about one third of all 11 year olds are overweight and one in five are obese.  Our study shows that there is a clear link between having a TV in the bedroom as a young child and being overweight a few years later.

"We found that having a TV in the child's bedroom was an independent risk factor for being overweight and increased body fatness in this nationally representative sample of UK children. Childhood obesity prevention strategies should consider TVs in children's bedrooms as a risk factor for obesity."

The research, which used data from the Millennium Cohort Study (MCS), found that over half of the 12 556 children sampled had a TV in their bedroom at age 7. This finding is well in line with other recent UK reports on children's media use, which also suggest that children increasingly use portable devices such as tablets and laptops in their bedrooms.

The number of hours spent watching TV or DVDs was associated with increased body fatness among girls only, indicating a dose-response relationship where the more TV the girls watched, the more likely they were to be overweight. Part of the reason for this gender difference could be that already at this young age, girls are far less physically active than boys, as suggested by previous studies.

"The causes of overweight and obesity are complex and multiple. Screen time is part of the bigger picture and further research is needed among older children and adolescents, as the use of screen-based media including computers, mobile phones and tablets increases with age." added Dr Heilmann.