Injecting mice with a UCL-discovered bacterium can reduce stress and inflammation, preventing them from developing PTSD-like conditions, finds a new international study led by the University of Colorado Boulder. 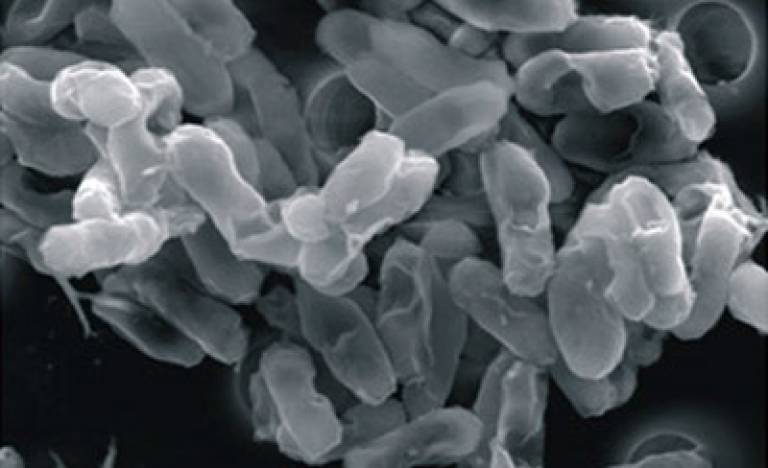 The research, published in Proceedings of the National Academy of Sciences, found that mice injected with the bacterium were more resilient to stress, showing less fear and anxiety in stressful situations. The immunization also changed serotonin activity in the brain, with similar beneficial effects to antidepressants or long-term exercise. Additionally, immunized mice were protected against colon inflammation which was caused or worsened by stress in unimmunized mice.

The bacterium, Mycobacterium vaccae (M. vaccae), is found naturally in soil and was first isolated and characterised at UCL by Professor John Stanford. Its immunological properties were investigated by Professor Graham Rook (UCL Infection & Immunity), a co-author on the new study. "The idea that a bacterium found in soil could prevent serious mental health problems might sound far-fetched, but bacteria can have a profound effect on both mental and physical health," says Professor Rook. "Microorganisms in our bodies play a vital role regulating our immune systems and can help to reduce inflammation. As well as causing physical problems, inflammation is also a risk factor for several psychiatric disorders. Previous research has found that US Marines with evidence of inflammation in their body are more likely to develop PTSD*, and the latest work suggests that bacterial immunization might help to reduce this risk. It shows that M. vaccae simultaneously prevents colitis and psychiatric symptoms by switching on regulatory pathways in the immune system."

The study supports the 'old friends' hypothesis, which was first proposed by Professor Rook in 2003 as an update of the 'hygiene hypothesis'.

"Our ancestors lived among a rich variety of microorganisms and our immune system evolved to function in this environment," explains Professor Rook. "We now have much less contact with common microorganisms such as soil bacteria and our diets have changed leaving fewer nutrients available to gut bacteria. Without these 'old friends' helping to regulate the immune system, we are left at higher risk of inflammatory diseases and psychiatric disorders linked to chronic low-level inflammation. The new study supports the strategy of re-introducing humans to their 'old friends' to improve both mental and physical health."

To test the effect of the M. vaccae bacteria on stress resilience, the researchers injected male mice with either a heat-killed sample of the bacterium or a placebo. The mice were then housed individually or with a dominant male for 19 days. Living with a dominant male is stressful and leads to submissive behaviour.

Mice that had been given M. vaccae were better at coping in this situation, acting less submissively and spending less time fleeing from or avoiding the dominant male. They were also less fearful and more willing to explore open environments when they were taken out of the housing on day 20. Previous studies in rodents and humans suggest that this response is a marker for reduced vulnerability to long-term anxiety and depressive-like symptoms.

"The immunized mice responded with a more proactive behavioural coping response to stress, a strategy that has been associated with stress resilience in animals and humans," says Professor Christopher Lowry from the University of Colorado Boulder, senior author of the new research. "An injection of M. vaccae is not designed to target a particular antigen the way a vaccine would, but instead activates the individual's immunoregulatory responses to protect from inappropriate inflammation."