Nitrous oxide administered after a traumatic event may help to prevent distressing memories from 'sticking' in the brain, suggests new UCL research. 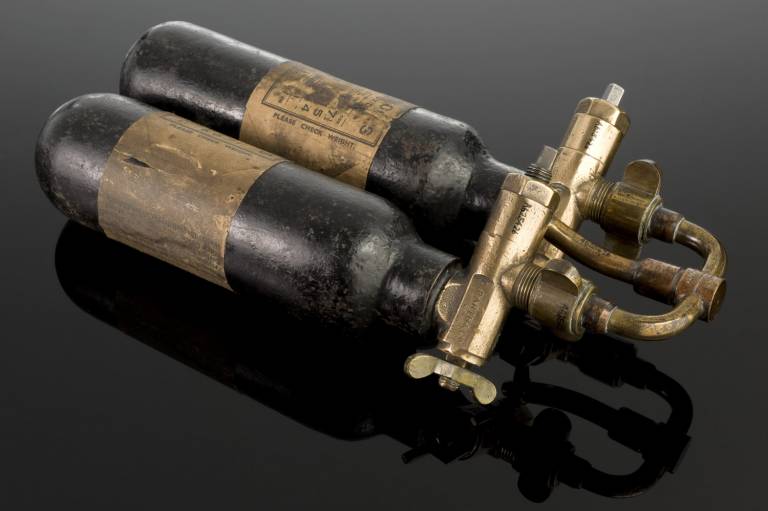 The study, published in Psychological Medicine, found that people who inhaled nitrous oxide after watching traumatic film clips experienced a much faster decline in distressing memories than those who breathed normal air. The number of distressing memories reported by the volunteers went down exponentially over the days following the film for those given nitrous oxide, while the decline was more gradual and linear for those given air.

The research involved 50 healthy adult volunteers who watched two graphic scenes from a film once described as 'so violent and cruel that most people will find it unwatchable'.* These film clips were chosen as they have been shown to create a much milder form of the intrusive memories that might form following real-life trauma. The study was overseen by both a trained clinical psychologist and a medical doctor.

After participants had seen the clips, they were given a gas to breathe for half an hour. Half were given a mixture of equal parts nitrous oxide and oxygen, while the other half were given medical air. In the week that followed, volunteers completed a daily diary to record film-related 'intrusions'. Intrusions are involuntary memories that spontaneously come to mind, which can often be distressing.**

"The day after they saw the film, the number of intrusions experienced by the group who received nitrous oxide fell by over a half," explains lead author Dr Ravi Das (UCL Psychology). "By contrast, the decline in intrusions was much slower in the group who received air, where there was not a significant drop in intrusions until the fourth day. We think that this is because nitrous oxide disrupts a process that helps permanent memories to form."

"On any given day your brain will be exposed to a huge amount of information, some important, but most trivial. If information is 'important' enough to remember, for instance because it produces a strong emotional response, it is 'tagged' for storage. The brain requires N-Methyl D-Aspartate (NMDA) receptors to tag information during the day, which is then filed for long-term storage while we sleep. We know that nitrous oxide blocks NMDA receptors, so could interfere with tagging. This might explain why the nitrous oxide group seemed to have weaker memories of the film the day after they watched it."

The research also found that people who felt more 'dissociated' after watching the film tended to experience more intrusive memories. Dissociation is a measure of how detached someone feels from a situation and from themselves, and is assessed by questionnaire. Signs of dissociation include a distorted experience of time, a feeling that things are unreal and dream-like, and a feeling of disconnection from one's body.

A feeling of dissociation during and after a traumatic event can be a warning sign of Post-Traumatic Stress Disorder (PTSD), which is consistent with the study linking dissociation to more intrusive memories. However, as nitrous oxide induces a dissociative experience, it is possible that people who already feel dissociated following a traumatic event may actually experience worse intrusions after receiving nitrous oxide.

"Nitrous oxide is routinely used as a painkiller by paramedics and in A&E departments because it is safe and easy to administer," explains senior author Dr Sunjeev Kamboj. "Many people who end up in an ambulance will have undergone some form of psychological trauma, and our study suggests that the nitrous oxide is likely to be having some effect on how their brain processes it. However, whether it helps to prevent symptoms of PTSD or makes them more likely may depend on how dissociated patients feel before they receive it. Further research is now needed to determine whether dissociation similarly affects the response of trauma victims who receive nitrous oxide or other painkillers such as ketamine.

"It is worth noting that our volunteers were given nitrous oxide continuously for half an hour, whereas the amount that hospital patients receive will vary significantly. Some may only receive small doses in the ambulance whereas others could be breathing it on-and-off for hours in a hospital bed. Any effects, positive or negative, are also likely to vary depending on the dose. The amount of nitrous oxide used recreationally in a balloon, for example, would likely be too small to have a noticeable effect on memory formation."