Mice are likely to freeze at the sight of small slow-moving shapes and flee from fast approaching ones, finds new UCL research. 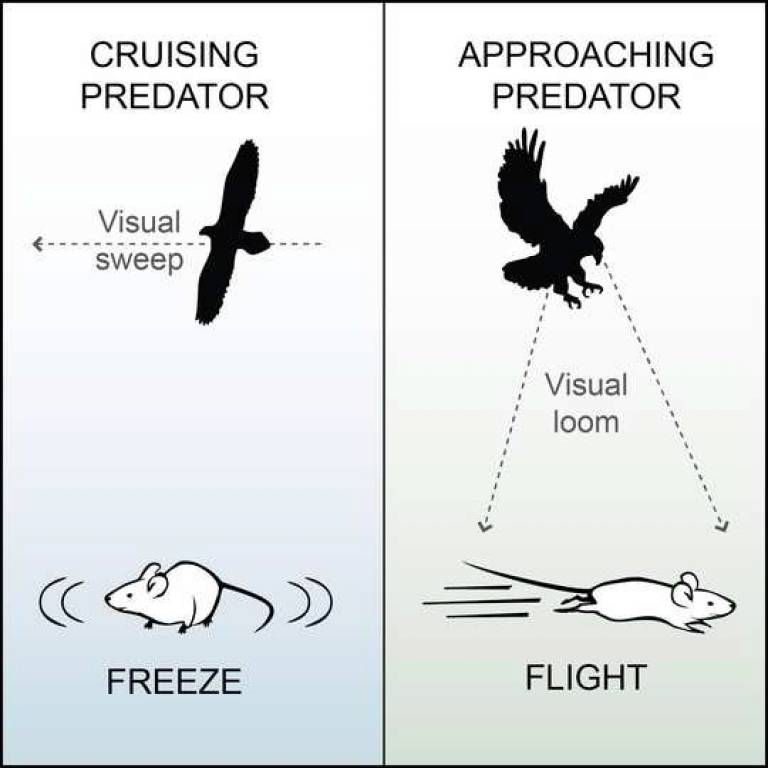 This provides the first evidence that mice make instinctive behavioural choices based on vision alone, and could help inform future studies of behaviour and brain function in mice. Knowing how mice instinctively respond to visual cues will enable researchers to conduct easy, reproducible studies to see if this behaviour is disrupted in mental and physical conditions.

The study, published in Current Biology, involved mice that were shown visual stimuli in a controlled environment while their movements were filmed. The environment included open ground, a covered refuge and a display screen representing the 'sky'.

"We found that mice reacted consistently to these different visual cues, offering a reliable way of driving opposing behaviours," says Dr Sam Solomon (UCL Experimental Psychology), who led the study. "Previous research has relied on presenting real predators, which are harder to control and also produce scent or sound. Mice are generally thought to rely on scents and sounds more than vision. By using only visual cues, we found strong evidence that they do use the visual system to guide their behaviour."

"The fact that mice appeared to take various factors into account when deciding whether to freeze or flee from a cruising predator suggests that this is not a simple reflex," explains Dr Solomon. "When they saw a cruising stimulus, mice would often freeze initially and then flee, suggesting that they continuously assess their defence strategies during freezing behaviour. They then select an optimal defence strategy, considering the flight path of the predator."