An art exhibition opening this week at UCL brings together six works by artists from Iraq and Britain to explore different experiences of the Iraq war on the 10th anniversary of the invasion. 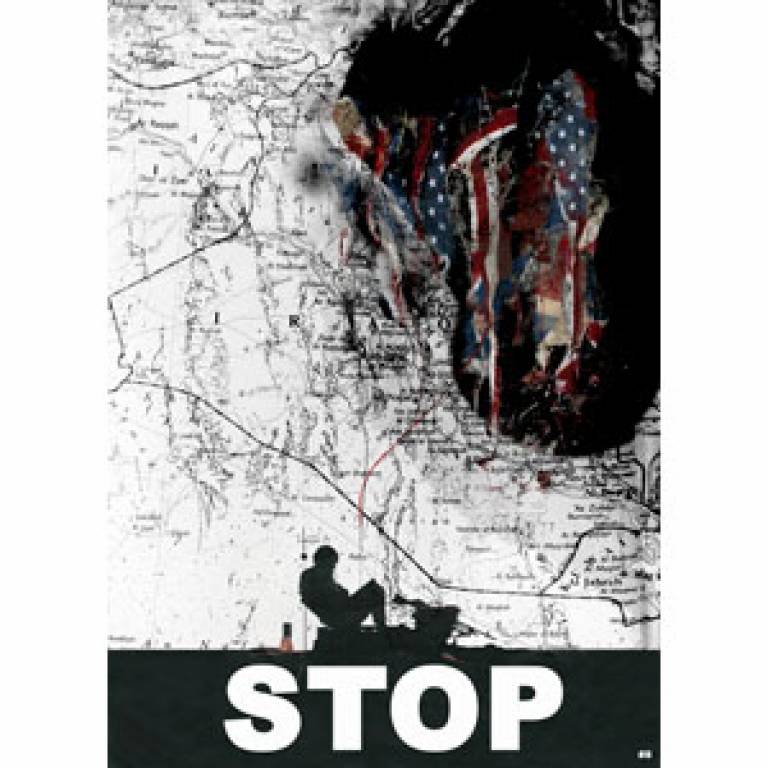 The project which includes artwork by professional artists, anti-war campaigners and a British soldier, presents a broader range of artistic responses to the war than is usually seen in the UK.

"The idea of the exhibition was to give a sense of how artists have responded to the war ten years on from the invasion of the diversity of those responses in terms of artistic practices, perspectives and experiences," said curator Dr Alan Ingram (UCL Geography). "I also wanted to explore the themes of space, place, landscape and territory, which come up again and again in how artists deal with war."

The artists' work spans a wide range of practices, including painting, drawing, engraving, montage and mixed-media, and has been exhibited or used in a wide variety of ways, ranging from personal diaries, to banners used on demonstrations and exhibitions in contemporary art galleries in the UK and internationally. As well as highlighting the violence, anxiety and ruin of war, the exhibition raises questions about resistance, resilience and dreams of peace.

"The project has highlighted how art and war both revolve around the experience and representation of geographic space. By looking at things through the theme of space, we can gain a deeper understanding of the relationships between art and war," said Dr Ingram.

It contrasts works like Farthing's The Enemy Within: Driving in Iraq, which depicts the restricted view from an armoured Humvee, surrounded by thoughts and recollections flowing through the artist's mind on a rapid drive back to base, with Malallah's My Country Map, which deals with the destruction of Iraq as a result of the invasion and occupation.

While kennardphillipps' STOP#8 combines maps, flags and military imagery, Buhriz by Satta Hashem is a drawing made after a phone call home with his father, still in Iraq, while a battle was taking place.

"I believe that approaching the war through art opens up opportunities for discussion that can be closed down by standard political debates and positions," said Dr Ingram. "Taking account of the broader range of experiences also potentially offers something different to the current focus we see in the media on the experience of British service personnel."

As well as researching art works, exhibitions and events, the research project on which the exhibition is based has also involved looking at press coverage of Iraq war-related art and talking to artists with very different experiences and perspectives.

This has included artists from Iraq who have left at different times before and since 2003 as well as British artists who were opposed to the war, those who avoided taking explicit positions and those who worked 'embedded' with British armed forces in Iraq.

"Reviewing coverage of Iraq war-related art and talking to artists with completely different experiences provides a great opportunity to present a new take on things," said Dr Ingram. "Through the exhibition we've been able to present some of these issues through work that engages particularly with geographical questions, of space, place, landscape and territory. Everyone has an experience of home, a sense of place and of landscape; what this exhibition presents is what happens when they are torn apart by war."

The exhibition is accompanied by workshops, talks and discussions reflecting on relationships between art, war and peace.