UK Prime Minister David Cameron has visited the Dementia Research Centre at UCL as part of this morning's government pledge to double dementia research funding to £66 million by 2015. 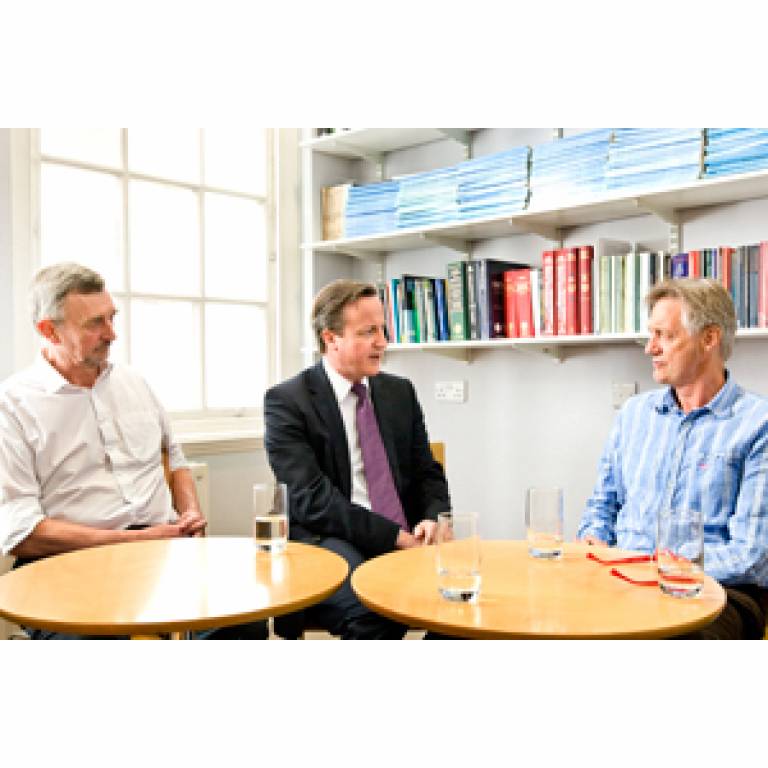 The Prime Minister visited the Centre, part of UCL Institute of Neurology, as well as partner hospital the National Hospital for Neurology and Neurosurgery (NHNN). He spoke to clinicians and academics about their work, as well as patients involved in UCL research.

Referring to dementia as "one of the greatest challenges of our time", Mr Cameron said: "We've got to treat this like the national crisis it is. We need an all-out fightback against this disease, one that cuts across society. This is a personal priority of mine, and it's got an ambition to match. That ambition - nothing less than for Britain to be a world leader in dementia research and care."

Professor Michael Hanna, Director of the UCL Institute of Neurology, who met the Prime Minister today, said: "Neuroscience research at UCL is already of world-leading quality - but faced with the enormous challenge of dementia, excellent neuroscience needs to translate into new therapies.

There are world class research teams at the UCL Institute of Neurology who are developing new experimental treatments for dementia and this critical mass of expertise is set to increase in coming years.

Professor Michael Hanna, Director of the UCL Institute of Neurology

"There are world class research teams at the UCL Institute of Neurology who are developing new experimental treatments for dementia and this critical mass of expertise is set to increase in coming years. We share the Prime Minister's ambition to place the UK at the very forefront of medical research in this area, helping to find treatments for patients. Any initiative that will help in achieving this goal is to be applauded."

Professor Martin Rossor, UCL Institute of Neurology, said: "We were pleased to welcome David Cameron to the Dementia Research Centre today to tell him more about our research. In particular, we discussed the challenge of early and accurate diagnosis of the causes of dementia and this access to prompt, accurate diagnosis is something the Prime Minister emphasised in his speech. It is excellent news that the government has pledged more money for this area of research, which is so desperately needed."

In 2007 the Commission for Health Improvement sponsored a scoping exercise to identify audits which could improve dementia services. This work was led by Professor Martin Orrell of UCL's Unit of Mental Health Sciences and resulted in the national audit of general hospital care for dementia and the memory services accreditation network. In conjunction with today's speech by Mr Cameron, the Department of Health published "Prime Minister's challenge on dementia: Delivering major improvements in dementia care and research by 2015", a document which includes an action to ensure memory services are established in all parts of the country, and to improve the quality of services by increasing the proportion that are accredited through the Memory Services National Accreditation Programme (MSNAP).

Professor Orrell, who is the Chair of MSNAP said: "The success of MSNAP has seen its membership grow to include 52 services. Today's endorsement by the Prime Minister provides a great opportunity to improve the quality of memory services across the country to ensure that people with dementia and their families have rapid access to high quality care."

UCL scientists are at the forefront of dementia research, working closely with clinicians at partner hospital the NHNN, part of University College London NHS Foundation Trust. This partnership brings together clinical and scientific excellence in the search for effective diagnosis and treatment for devastating neurological diseases.

UCL is Europe's research powerhouse in neuroscience - ranked second in the world, and first in Europe, in neuroscience and behaviour by Thomson ISI Essential Science Indicators, and with more than twice as many publications and citations as any other European institution.

Neuroscience is a strategic priority for UCL, spearheaded by the new Faculty of Brain Sciences. UCL recently received a £20million grant from the Wolfson Foundation to establish The Leonard Wolfson Experimental Neurology Centre at Queen Square, which will be dedicated to the understanding and treatment of neurodegenerative diseases. This is the largest single award ever made by the Foundation and one of the largest philanthropic donations in the university's history.

The Centre will accelerate the development of treatments and identify future therapeutic targets for neurodegenerative diseases, with the aim of earlier intervention for patients.