A new centre dedicated to the understanding and treatment of neurodegenerative diseases will be established at UCL following the award of a £20million grant from the Wolfson Foundation, it was announced today. 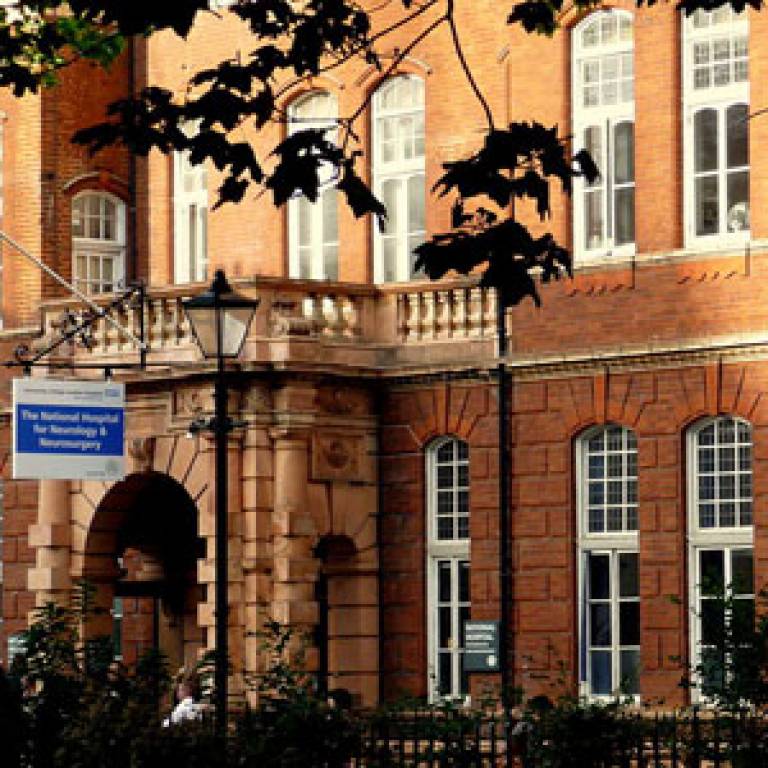 The grant is the largest single award ever made by the Foundation and one of the largest philanthropic donations in UCL's history. It is made as a result of the Wolfson Neurology Initiative, designed as a legacy to Lord Wolfson of Marylebone, who died in 2010.

The grant will be used to establish The Leonard Wolfson Experimental Neurology Centre at UCL. It will be based at the heart of the National Hospital for Neurology and Neurosurgery (NHNN), the partner hospital of the UCL Institute of Neurology, reflecting the importance of bringing together clinical and scientific excellence in the search for effective treatments for these devastating diseases. The Centre will accelerate the development of treatments and identify future therapeutic targets for neurodegenerative diseases, with the aim of earlier intervention for patients.

This award is an appropriate legacy for our former chairman, Lord Wolfson. During his lifetime and under his guidance his family trusts committed over £1 billion of funding in real terms for good causes

Neurodegenerative diseases include Alzheimer's disease and Parkinson's disease, as well as less common but equally devastating conditions such as Huntington's disease and motor neurone disease. They are the main cause of dementia in the UK, the 6th leading cause of death and a major cause of disability and residential care placement. Dementia alone costs the UK economy £23billion a year - yet government and charitable investment in dementia research is 12 times lower than spending on cancer research.

Paul Ramsbottom, Chief Executive of The Wolfson Foundation, said: "The grant reflects our commitment to supporting this vital area of science and addressing the crisis of neurodegenerative disease facing an ageing population. In these times of austerity, the Foundation has taken the bold decision to commit £50 million of funding during 2011 including our largest single grant of £20million - recognising that much other philanthropic support is under pressure.

"We developed an extremely rigorous review process for the award, with advice provided by a team of internationally acclaimed scientists, chaired by the former Dean of the Harvard Medical School. The standard of the competition was extremely high and UCL's bid was of exceptional quality.

"This award is an appropriate legacy for our former chairman, Lord Wolfson. During his lifetime and under his guidance his family trusts committed over £1 billion of funding in real terms for good causes."

Professor Nick Fox, UCL Institute of Neurology, said: "The highest priority for patients with neurodegenerative diseases is to find treatments that slow or halt disease progression. These treatments must then be offered as early as possible, when the minimum of irretrievable neuronal loss has occurred, in order to have maximum impact on loss of cognitive and neurological function. There is increasing recognition in the field that the most effective therapies will be those applied in the very earliest stages of disease. This recognition will be at the heart of the work carried out by the Centre."

Professor Alan Thompson, Dean of the UCL Faculty of Brain Sciences, said: "We are absolutely delighted to have been successful in our bid to attract this funding. It will strengthen and further develop the extensive work already underway at UCL in the fields of neurology and neuroscience and complements the experimental medicine focus of the UCLH/UCL NIHR Biomedical Research Centre and the Dementia Biomedical Research Unit. The Centre brings together an internationally renowned team of academic neuroscientists and complements our wide-ranging strengths in translational research in neurodegeneration at the UCL Institute of Neurology. Situating it within NHNN is crucial, as clinical and research expertise and patients can be brought together in the heart of the hospital."

Professor Malcolm Grant, UCL President & Provost, added: "Lord Wolfson and the Wolfson Foundation have made an outstanding contribution to education and science over the last 50 years. Through this new Centre, we are determined to provide a fitting and lasting legacy in his memory, building upon the warmth of his longstanding friendship and his constant support for the advancement of medical science for human benefit."

Sir Robert Naylor, UCLH chief executive, said: "We welcome the establishment of a research centre at the heart of the NHNN, a move which reflects the importance we all give to the close relationship between clinical and scientific excellence. We have chosen a location which will enhance safety for patients involved in clinical trials by providing an extensive neurosciences infrastructure to support the centre. It will also allow us to work at the leading edge of translating scientific discovery into routine patient treatments. I wish to congratulate all of the research and clinical staff involved in this great achievement."