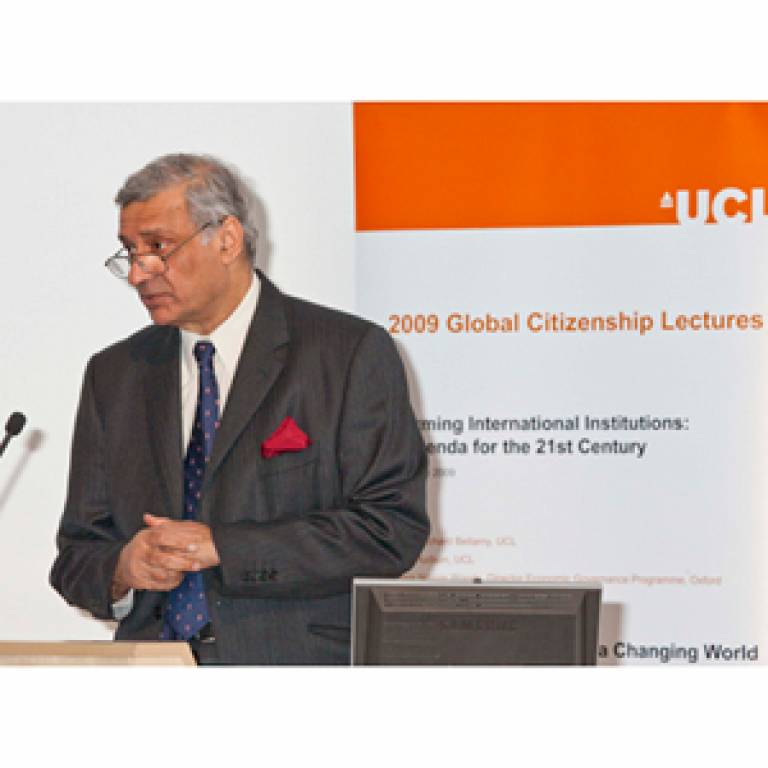 Around 150 diplomats, business people, academics, students and non-governmental organisation representatives came to UCL on 21 January for  'Reforming International Institutions: An Agenda for the 21st Century', the first in a series of three lectures jointly organised by UCL and the Commonwealth Secretariat.

Introducing the lecture, Commonwealth Secretary-General Kamalesh Sharma said the principles of international governance have to include transparency and inclusiveness. "Everybody has rights and expectations," he stressed. Mr Sharma said it was a great pleasure to be associated with UCL - an institution which has always prioritised the right to freedom of thought and speech.

Professor Ngaire Woods from the Global Economic Governance Programme at the University of Oxford spoke of the urgency for dramatic reform of global financial institutions, emphasising that new rules were not enough.

Speaking of the lecture series, Professor Worton, Vice-Provost (Academic and International) said: "Exploring what global citizenship means in the 21st century is at the heart of UCL's educational vision. Through our partnership with the Commonwealth Secretariat, we are providing a platform for distinguished speakers from UCL and beyond to debate crucial issues in the world today."

The next lecture in the series will be 'Development Policies for a Changing World' on 31 March 2009, featuring Ransford Smith (Commonwealth Deputy Secretary-General), and Professor Orazio Attanasio (UCL Economics and Director of the Institute of Fiscal Studies Centre for the Evaluation of Development Policies).

Professor Amartya Sen, Harvard University's Nobel Prize-winning economist and chair of the Commonwealth Commission on Respect and Understanding, will deliver the final lecture 'Civil Paths to Peace' on 2 June 2009.

To find out more about the series, follow the link at the top of this article.

UCL Context
UCL seeks to provide an education for 'global citizenship': preparing our students for the intellectual, social and personal challenges they will encounter during their time in London - one of the most cosmopolitan cities in the world - and throughout their lives as members of a global community.