New research to be published in the American journal, 'Proceedings of the National Academy of Sciences', shows a link between the way animals move and the size of part of their inner ear. 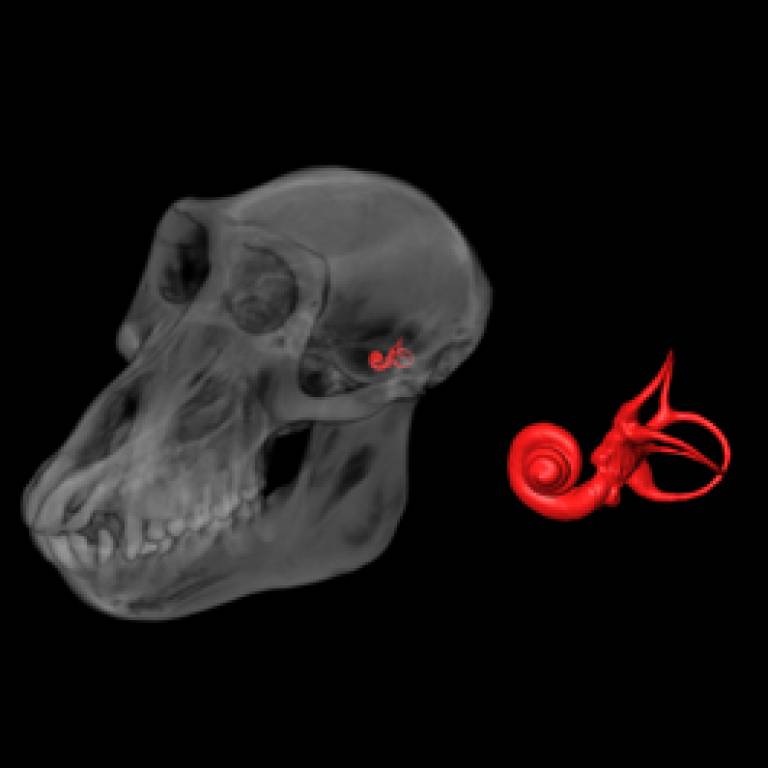 An international research team led by Professor Fred Spoor, UCL Anatomy & Developmental Biology, and Professor Alan Walker, Pennsylvania State University, documented the link between the size of the three semicircular canals of the inner ear, which enable animals to balance, and the type of movement created by the animal's limbs.

The researchers studied 91 separate primate species and 119 other species, mostly mammals, which habitually move in diverse ways in varied environments. The project was the first large-scale study of the relationship between the dimensions of the semicircular canals and locomotion.

Professors Spoor and Walker stated: "We have shown that there is a fundamental adaptive mechanism linking a species' locomotion with the sensory systems that process information about its environment."

The semicircular canals within the inner ear are filled with a fluid, which moves when the animal moves. This movement is sensed by special cells that send signals to the brain, triggering the neck and eye muscles to reflexively keep visual images stable.

The basic hypothesis of the project was that the animal's organ of balance should be irrevocably linked to the type of locomotion produced by its limbs. Professor Walker explained: "If an animal evolves a new way of moving about the world, its organ of balance must evolve accordingly." From visual information, the animal tracks its position relative to stationary objects such as tree trunks, branches, rocks or cliffs, or the ground. Having a stable image of the environment is especially important for acrobatic animals that leap, glide or fly.

To make the discovery, the scientists scanned skull samples of each species, measuring the size of each semicircular canal and calculating the radius of curvature. Most of the specimens were scanned at the Center for Quantitative Imaging at Penn State on the OMNI-X high-resolution x-ray CT scanner, which can resolve features approximately one-hundredth the size of those detected by medical CT scanners.

In addition, field workers used personal knowledge or film of animals in the wild to classify species into one of six locomotor categories ranging from very slow and deliberate to fast and agile. The scientists then compared the canal size of each species to its category of movement.

"How an animal moves is a basic adaptation," said Professor Walker, an expert in primate locomotion. "Now we have a way to reconstruct how extinct species moved that is completely independent of analysis of the limb structure. For the first time, we can test our previous conclusions using a new source of information."

The research is published on 26 June in the print edition of 'Proceedings of the National Academy of Sciences', and in the journal's online early edition, which is out today.