Iraq’s ancient buildings are being destroyed by climate change 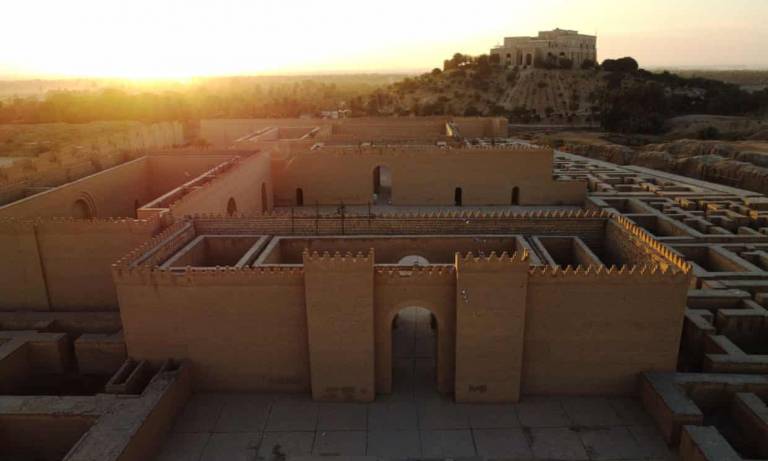 Some of the world’s most ancient buildings are being destroyed by climate change, as rising concentrations of salt in Iraq eat away at mud brick and more frequent sandstorms erode ancient wonders.

Iraq is known as the cradle of civilisation. It was here that agriculture was born, some of the world’s oldest cities were built, such as the Sumerian capital Ur, and one of the first writing systems was developed – cuneiform. The country has “tens of thousands of sites from the Palaeolithic through Islamic eras”, explained Augusta McMahon, professor of Mesopotamian archaeology at the University of Cambridge.

Damage to sites such as the legendary Babylon “will leave gaps in our knowledge of human evolution, of the development of early cities, of the management of empires, and of the dynamic changes in the political landscape of the Islamic era”, she added.

Mesopotamia, the land between the two rivers of modern-day Iraq, is rich with salt (mun in Sumerian) that exists naturally in the soil and groundwater. Cuneiform texts mention the profession of a salt collector and describe the use of salt in everything from preserving food, to healthcare and rituals. There is a Sumerian proverb that says the basic necessities of life are bread and salt: “When a poor man has died, do not revive him. When he had bread, he had no salt. When he had salt, he had no bread.”

Salt in the soil can aid archaeologists in some circumstances, but the same mineral can also be destructive, and is destroying heritage sites, according to the geoarchaeologist Jaafar Jotheri, who described salt as “aggressive … it will destroy the site – destroy the bricks, destroy the cuneiform tablets, destroy everything”.

The destructive power of salt is increasing as concentrations rise amid water shortages caused by dams built upstream by Turkey and Iran, and years of mismanagement of water resources and agriculture within Iraq.

“The salinity in Shatt al-Arab river started to increase from the 90s,” said Ahmad N A Hamdan, a civil engineer who studies the quality of the water in Iraq’s rivers. In his observations, the Shatt al-Arab – formed by the confluence of the Tigris and Euphrates - annually tests poor or very poor quality, especially in 2018, which he called a “crisis” year when brackish water sent at least 118,000 people to hospital in southern Basra province during a drought.

The climate crisis is adding to the problem. Iraq is getting hotter and dryer. The United Nations estimates that mean annual temperatures will rise by 2C by 2050 with more days of extreme temperatures of over 50C, while rainfall will drop by as much as 17% during the rainy season and the number of sand and dust storms will more than double from 120 per year to 300. Meanwhile, rising seawater is pushing a wedge of salt up into Iraq and in less than 30 years, parts of southern Iraq could be under water.

“Imagine the next 10 years, most of our sites will be under saline water,” said Jotheri, a professor of archaeology at Al-Qadisiyah University and co-director of the Iraqi-British Nahrein Network researching Iraqi heritage. He started to notice damage from salt at historic sites about a decade ago.

One spot suffering significant damage is Unesco-recognised Babylon, the capital of the Babylonian Empire, where a salty sheen coats 2,600-year-old mud bricks. In the Temple of Ishtar, the Sumerian goddess of love and war, the base of the walls are crumbling. In the depths of the thick wall, salt accumulates until it crystallises, cracking the bricks and causing them to break apart.

Other sites that have been affected are Samarra, the Islamic-era capital with its spiral minaret that is being eroded by sandstorms, and Umm al-Aqarib with its White Temple, palace and cemetery that are being swallowed up by the desert.

This year, Iraq lost a piece of its cultural heritage. On the edge of the desert, 150km south of Babylon, is a bed of salt that was once Sawa Lake. The spring-fed water was home to at least 31 species of bird, including the grey heron and the near-threatened ferruginous duck. Now, it is completely dry because of overuse of water by surrounding farms and climate change. Lack of enforcement of regulations over groundwater use means farmers can freely drill wells and plant wheat fields that are an eruption of lush green in the dusty desert landscape.

“When I was a child I remembered that Sawa Lake was a big lake, a large lake. It looked like the sea. But now it’s gone. Totally gone. We don’t have any lake any more,” said Jotheri.

Desert plants are growing where there once was water and Sawa is fated to become yet another source of sandstorms.