From Costa Rica to Iraq, keeping culture and history intact 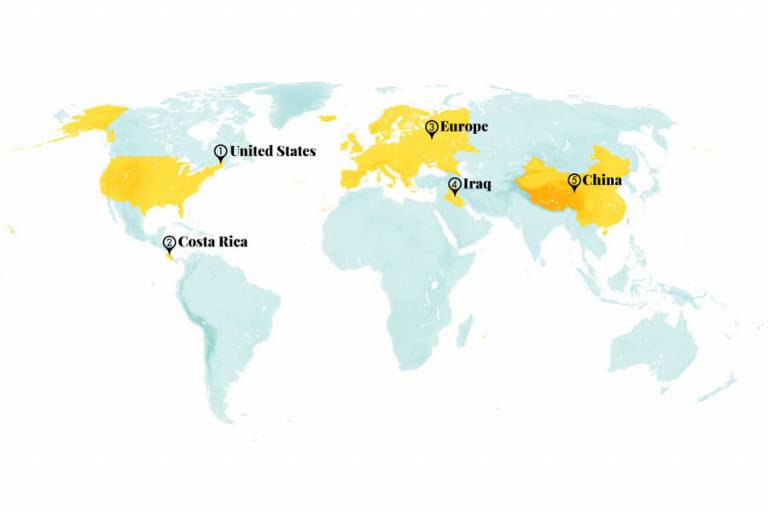 More institutions are examining the provenance of possibly stolen artifacts in their possession. So many are from Africa. But Costa Rica is the recent recipient of a second collection quietly returned by the Brooklyn Museum.

Institute for Justice, a nonprofit libertarian law firm, reports that Maine collected $17 million in forfeiture revenue from 2000 to 2019, most resulting from the “equitable sharing loophole,” when local law enforcement partners with federal agencies to avoid state regulations and then keeps 80% of the seized assets. Having won bipartisan support in the state Legislature, Maine’s new law closes that loophole and requires a criminal conviction in order to seize private property, with few exceptions. This follows similar repeals in Nebraska, New Mexico, and North Carolina, while many other states have passed civil asset forfeiture reforms.

The Brooklyn Museum has returned 1,305 pre-Columbian artifacts to Costa Rica. Some of the items date back millennia, and were taken from Central America by American railroad tycoon and banana trader Minor Cooper Keith, known today for his exploitative business practices. The October 2020 repatriation includes eating utensils, sculptures, and a tombstone that researcher Daniela Meneses says “ we have only seen as illustrations in study books.”

Pre-Columbian stone statues, repatriated from the Brooklyn Museum, are displayed for classification by archaeologists at National Museum facilities in Pavas, Costa Rica.

Both this shipment and a previous handoff of about 900 ceramic vessels in 2011 were unprompted, meaning the National Museum of Costa Rica in San José did not formally request their return. The gift comes amid debate over how museums should handle pieces obtained through colonization and conquest, and significantly augments the National Museum’s collection. “The recovery of these archaeological pieces means recovering fragments of our past that crossed our borders when we still did not have legislation to prevent it,” said Culture and Youth Minister Sylvie Durán in a statement celebrating the news.

Kellogg Europe is updating its cereal boxes to be accessible for blind and partially sighted shoppers. Next year, the new boxes will feature colorful, high-contrast blocks that resemble a QR code. But unlike standard QR codes, this patch can be detected from several feet away by a smartphone. The NaviLens app, which was developed by a Spanish startup and is already being used by public transit systems in the Spanish cities of Barcelona, Madrid, and Murcia, reads aloud the product name, ingredients, and nutritional and allergen information.

In the United Kingdom’s successful trial program, the Royal National Institute of Blind People collaborated with the global cereal giant to bring NaviLens technology to nearly 60 grocery stores last fall. “The incorporation of the NaviLens codes onto food packaging is a positive step towards a more inclusive and accessible shopping experience for the visually impaired,” said NaviLens CEO Javier Pita. “This allows people with sight loss to shop more independently and make their own food choices.”

The Nahrein Network is helping local organizations preserve Iraq’s cultural heritage, which it sees as central to the country’s post-conflict recovery. Civil war and international isolation have made it difficult for Iraqi academics and cultural heritage professionals to secure funding, retain students, and conduct research. Meanwhile, the politicization of the country’s heritage has stymied government conservation efforts, and what little foreign funding actually reaches Iraq has usually focused on Judeo-Christian traditions and pre-Islamic society, failing to engage with local stakeholders.

That’s where the Nahrein Network steps in by supporting Iraqi-led projects that focus on the needs of local communities. So far, it’s issued 24 grants to projects ranging from a study of a conflict’s impact on Iraqi textile crafts to the creation of an undergraduate curriculum on intangible cultural heritage. One recipient is working with the Marsh Arabs, a minority group in southern Iraq’s marshlands, to create a dictionary of their nearly extinct dialect. In addition to these grants, the network has also awarded 18 scholarships to develop and promote Iraqi talents in the cultural heritage field. The Nahrein Network itself has secured funding through 2031 and plans to grow its operating teams in England and Iraq.

China announced that it no longer considers giant pandas endangered. Protected legally since 1958, giant pandas live in a small portion of China’s upper Yangtze River basin and are famously difficult to breed. The International Union for Conservation of Nature reclassified them from “extinct” to “vulnerable” in 2016 after wild populations rose by 17% to 1,864 in less than a decade. However, Chinese authorities disagreed with that status update, explaining how the population was still fragmented and struggling to reproduce. Now, with more than 1,800 wild pandas living in a vast network of 11,800 nature reserves, the government has made the leap.

At a press conference, Ministry of Ecology and Environment official Cui Shuhong credited the milestone to ecological restoration efforts, fishing bans in the river basin, and ongoing breeding programs. Other rare and endangered species, including Siberian tigers and Asian elephants, have also benefited from these measures.