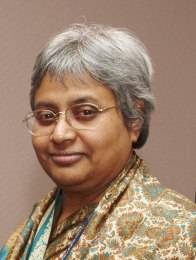 Professor Shervanthi Homer-­‐Vanniasinkam was appointed Consultant Vascular Surgeon at The General Infirmary at Leeds in October 1995, having trained in India and the UK.

In June 2008 she was awarded a Personal Chair in Clinical and Experimental Vascular Research by the University of Bradford; in 2006, she was appointed to the first Chair in Translational Vascular Medicine at Bradford.

In September 2008, she was appointed Director of Research and Education at the Northwick Park Institute for Medical Research (affiliated to University College London; UCL) and was invited to accept an Honorary Chair in Surgery at UCL. In addition to her clinical work as a full-­‐time vascular surgeon, she is actively involved in a number of basic, applied and translational research projects. Her initial research interests focused on ischaemia-­‐reperfusion injury in which she has published widely and has given a number of national and international presentations.

Recently, Professor Homer-­‐Vanniasinkam has been associated with emerging technologies and their applications in healthcare; she is invited to participate in several national initiatives in this sphere of her work.

Professor Homer-­‐Vanniasinkam holds office in a number of national and international committees and organizations.

She is on the Council of the Vascular Society of Great Britain & Ireland and is the Founding Chair of its Research Committee.

She currently holds a number of Visiting Professorships and collaborative appointments in this country and abroad.