This will enable the fusion of anatomical information and regional measurements of changes in cerebral tissue oxygenation, oxygen utilization and energy metabolism. The instrumentation and techniques we develop can characterize and monitor the progression and treatment of brain injury in human adults, neonates and animals.

We develop state of the art near-infrared spectroscopy (NIRS) systems to monitor changes in haemoglobin oxygenation and metabolism via cytochrome c oxidase in the brain.

A direct measure of cerebral energy metabolism can be obtained by measuring changes in oxidation state of cytochrome c oxidase (CCO) – a key component in oxidative metabolism which is directly related to mitochondrial ATP production [1]. CCO is the terminal electron acceptor in the electron transport chain (ETC): the final stage of oxidative metabolism. A unique copper dimer (Copper A) in the enzyme has an absorption peak around 835nm in its oxidised form (oxCCO), but not in its reduced state. A change in the redox state represents a change in oxidative cellular metabolism.

To accurately resolve changes in oxCCO, many wavelengths (broadband) are required as the concentration of CCO is 10% of the in-vivo haemoglobin concentration. Broadband NIRS-measured oxCCO changes are associated with acute changes in metabolism following hypoxia-ischaemia; see paper Bale et al. 2016 for a detailed review.

Recently, we have demonstrated in a study combining broadband NIRS and 31P MRS in 22 piglets that following HI, the recovery of the oxidation state of CCO (or oxCCO) was correlated with the recovery of Nucleotide-Triphosphate (NTP)/epp (epp=total exchangeable phosphate pool) and 24h survivability [1, 2]. Our results suggested that if NTP/epp and oxCCO recovery is not above 70% following HI, unfavourable outcome is likely. In addition, we observed that the measurements of the changes in brain tissue haemoglobin difference (Δ[HbDiff]=Δ[HbO2]-Δ[HHb]), which is indicative of brain oxygenation, show a poor correlation with NTP/epp and outcome. This approach has demonstrated that we can measure with broadband NIRS, oxCCO independently to haemoglobin. Importantly, when the measurement of oxCCO is combined with knowledge of baseline, its recovery following HI is associated with histology and is indicative of outcome (see Presentation1). 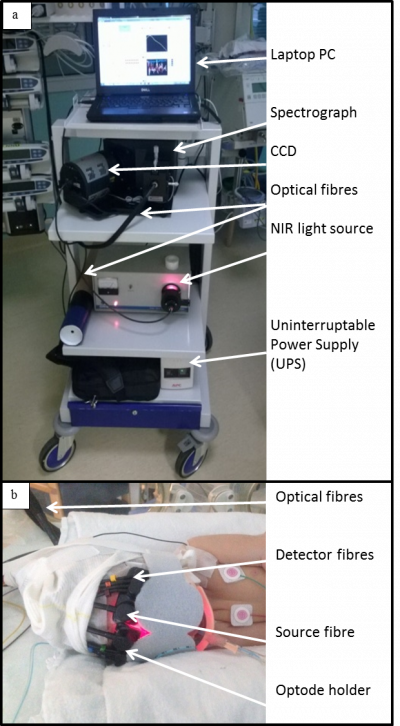 NIRS is based on the measurement of the change in attenuation of light. This attenuation is dictated by the absorption and scattering properties of tissues. In order to achieve an absolute concentration of the chromophores, both absorption and scattering coefficient need to be measured. In order to specifically measure those two parameters over a larger number of wavelengths in the near infrared region, we have developed a new time resolved optical spectrometer.

Time resolved spectroscopy is performed by measuring the time-of-flight of photons as they travel through the tissue, if many photons are measured we can generate temporal point spread functions that provide information about the absorption and scattering of light in the tissue.

The system, called MAESTROS, uses a supercontinuum laser and acousto-optic tunable filters allowing us to generate any combination of up to 16 wavelengths in the near infrared region and in a single measurement. The light is coupled to the tissue via two source fibres and detected by four photomultiplier tubes (ref 1 2). A photograph of the system is available on figure 2 (poster 1).

Figure 2. (A). Front side (Operator) and (B). back side (Subject) of the system. (C) Typical hemodynamic and metabolic responses to a muscular cuff occlusion.

In October 2013 the broadband NIRS instrument, called CYRIL, was installed in the UCLH neonatal intensive care unit to assess the feasibility of continuous monitoring of infants with HIE [1]. Since then we have monitored more than 80 infants with HIE during the first week of life and have demonstrated (i) that relationship of brain oxygenation and oxCCO during spontaneous desaturation events can be indicative of the severity of the brain injury [1]; (ii) the association between the brain tissue oxCCO and systemic physiology fluctuations is highly correlated in infants with severe HIE[2,3]; and (iii) the relationship between brain oxygenation and oxCCO during rewarming after therapeutic hypothermia was dependent on the severity of injury[4]. In addition, we have demonstrated that the continuous metabolic measurement of oxCCO provides unique information regarding brain health during neonatal stroke[5] and neonatal seizures[6].

The past couple of decades have seen a rapid increase in the use of functional near-infrared spectroscopy (fNIRS) for the monitoring of functional brain activity, especially for neuroscience applications. fNIRS is based on neurovascular coupling and derives information on the functional state of the brain by measuring the concentration changes of oxygenated (HbO2) and deoxygenated (HHb) hemoglobin that follow neuronal activity. Thanks to the recent technological advancements, more portable and wearable fNIRS devices have been developed and have paved the way to new neuroscientific investigations in more ecologically-valid scenarios, with people free to walk and interact with the environment as they would normally do in everyday life.

Since 2014, our group in collaboration with neuroscientists form the Institute of Cognitive Neuroscience at UCL have been exploring the feasibility of this new generation of wearable and miniaturized fNIRS instruments for the monitoring of brain activity in naturalistic situations. We have demonstrated that fNIRS is suitable to detect hemodynamic changes within the prefrontal cortex in response to an ecological prospective memory (PM) task [POSTER1] conducted in streets of London on freely-moving people using the Wearable Optical Topography (WOT) system developed by Hitachi (Figure 3). The video of the whole experimental procedure can be found in [1].

Figure 3: Representative participant carrying out the PM task in the streets of London (A) and example of HbO2 (red line) and HHb (blue line) changes in response to the PM task (B, adapted from [1]).

However, the identification of functional events necessary for any analysis of fNIRS data can be extremely challenging in case of ecological and unstructured functional protocols. To overcome this issue, our group have developed a new algorithm called AIDE (Automatic IDentification of Functional Events) that takes a ‘brain-first’ approach and recovers the onsets of functional events directly from fNIRS data with no assumption on the stimuli timeline [POSTER2]. AIDE is a Matlab-based software and can be downloaded here: https://github.com/multimodalspectroscopy/AIDE.git.

Recently, we are working on the assessment of typical and atypical functional activation patterns in Autism Spectrum Disorder (ASD) with fNIRS in more ecological scenarios. Preliminary results from this study have been recently presented at the fNIRS UK Meeting [POSTER3].

Our research focuses on the development of computational models of cerebral circulation and metabolism. These models integrate and simulate NIRS and MRS (magnetic resonance spectroscopy) measurements and contribute to the analysis of results from ongoing clinical experiments involving hypoxia ischaemia.

Metabolight is the outreach program undertaken by the Multimodal Spectroscopy group. It aims to educate and inform people about the group's work in using light to better understand the brain.