Researchers Vasiliki Kostiou and Ben Hall from Dept. MedPhys and Biomed Engineering have shown how the common p53 and Notch pathway mutations respond differently to crowding, influencing the way each mutant spreads through the tissue with implications for cancer development. 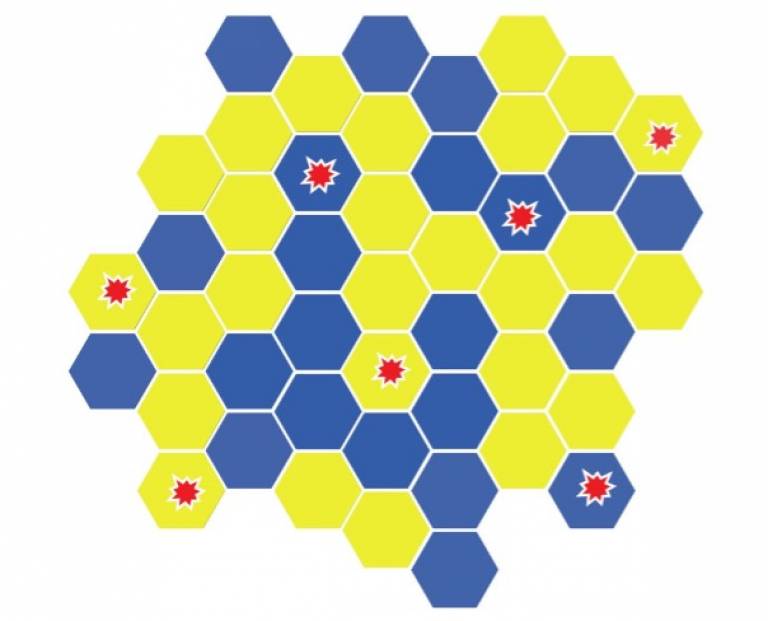 Mutations are popularly associated with illness and disease. Newly published work from the Department of Medical Physics and Biomedical Engineering at UCL has explored how mutations commonly found in healthy aged tissue act as a barrier preventing the spread of cancer associated mutations through competition. This work shows how important understanding the healthy, aged tissue is in learning how cancers start, and has implications for early detection and treatment approaches for cancer.

As healthy tissues age, they accumulate mutations arising from environmental mutagens and normal, healthy cellular processes. Two of the most commonly mutated genes in human skin and oesophagus are p53 and Notch1. Whilst both are also found mutated in cancers of these tissues, Notch1 is more frequently mutated in healthy aged tissue than tumours, implying that unmutated Notch1 supports tumour growth. Understanding how these different mutations spread and compete will inform our understanding of the earliest stages of cancer growth.

Vasiliki Kostiou designed and built computational models that simulated how healthy and mutated cells interact, compete and spread in tissues. Simulations of different mutated cells highlighted that the potential to spread can be attributed to their different response to the crowding in the tissue that results from cell growth.

A key finding was that Notch1 mutant cells, that are more common in healthy tissue than tumours, expand more efficiently than the tumour associated p53 mutant cells. This arises as the advantage of p53 carrying cells is lost as their local environment becomes more dense, slowing their growth over time. Notably, they showed Notch pathway mutations can be expected to reliably outcompete p53 mutant clones over long periods of time, consistent with human data and suggesting that competition between pre-cancerous clones and the healthy tissue may act as a barrier to cancer growth.

These findings highlight the importance of spatial competition and tissue-level effects in the spread of pre-cancerous cells in tissues. Spatial interactions of mutated and normal cells in tissues may define the way mutations spread and may shape the early steps of tumour formation.

This work was funded by the Royal Society, CRUK, and the Wellcome trust.