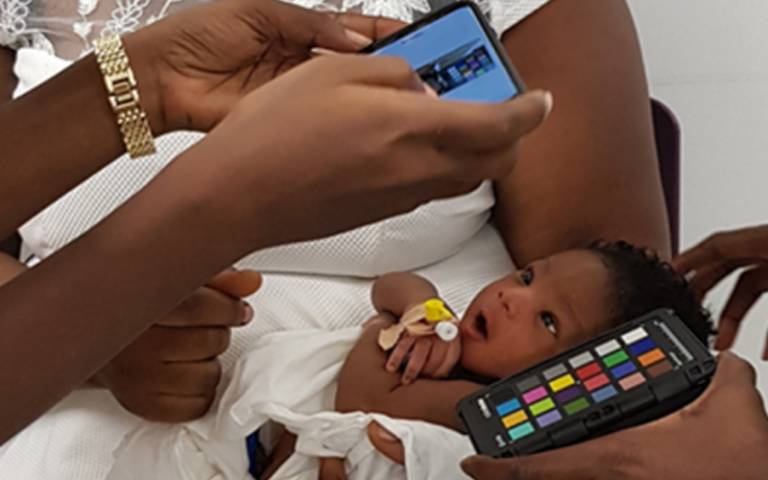 UCL research is developing a smartphone app that allows users to check for jaundice in newborn babies simply by taking a picture of the eye. The technology may be an effective, low-cost way to screen for the condition, and have particular impact in sub-Saharan Africa and south Asia where three quarters of global deaths from the condition occur each year.

The research, led by the Smartphone Imaging Group at UCL Medical Physics & Biomedical Engineering in collaboration with University College London Hospital (UCLH) and other institutions in London and Ghana, has made the news in several UK and international news outlets in connection with a recently published paper in PLOS One.

The Independent and Metro are among those who have highlighted the research.

Jaundice, where the skin and whites of the eyes turn yellow, causes 114,000 newborn deaths and 178,000 cases of disability a year worldwide, despite being a treatable condition. Three quarters of these deaths are in south Asia and sub-Saharan Africa.

“Given that smartphones are common even in poor and remote parts of the world, being able to use them to screen for jaundice would have a significant impact.” – Felix Outlaw, UCL

The study, published in PLOS One, found that a new screening method quantifying the yellowness of the eye – which used images captured on a smartphone camera – can be as effective at detecting more severe jaundice as costly screening devices recommended for use in the UK.

Principal investigator Dr Terence Leung explained the importance of the technology in a UCL press release, saying: “In many parts of the world, midwives and nurses rely on visual assessment alone to assess jaundice. However, this is unreliable, especially for newborns with darker skin.

“Our smartphone-based method provides a more robust assessment, ensuring serious cases do not go unnoticed. While we await the evidence of a larger trial, we believe that this method, used as an app, could help to prevent the deaths of newborn babies due to severe jaundice worldwide.”

Jaundice is caused by a yellow substance called bilirubin accumulating in the body. While most cases in newborns are harmless, in severe cases a neurotoxic form of bilirubin can enter the brain, leading to death or disabilities such as hearing loss, neurological conditions such as athetoid cerebral palsy, and developmental delays.

In hospitals, newborns suspected of being at risk can be given a blood test to determine the concentration of bilirubin in the blood. However, jaundice may only become problematic several days after birth, when mother and newborn are at home.

“While we await the evidence of a larger trial, we believe that this method, used as an app, could help to prevent the deaths of newborn babies due to severe jaundice worldwide.” – Terence Leung, UCL

In the study, smartphone pictures were taken of the eyes of 37 newborn babies at UCLH who had been referred for blood tests. These images were processed to remove the distorting effects of background light and the yellowness of the eye quantified to predict the level of bilirubin in the blood.

These predictions were then compared to the results of the blood tests. The method successfully identified all cases where treatment would normally be required, while identifying cases that would not require treatment 60% of the time. This is a success rate comparable to transcutaneous bilirubinometers – expensive hand-held devices recommended for use by midwives in the UK.

First author, Felix Outlaw (UCL Medical Physics & Biomedical Engineering), said: “Our screening method would require no special equipment apart from a smartphone and is a tenth of the cost of commercial devices used in the UK.

“Given that smartphones are common even in poor and remote parts of the world, being able to use them to screen for jaundice would have a significant impact.” Felix is a PhD student with the i4health CDT, funded by the EPSRC.

A larger trial of the screening method using the app and involving more than 500 babies is now underway in Ghana. The trial, a collaboration between UCL and the University of Ghana as well as Greater Accra Regional Hospital, is funded by the “Saving Lives at Birth” award, with funders including the United States Agency for International Development (USAID), the government of Norway, the Bill & Melinda Gates Foundation, Grand Challenges Canada, the UK government, and the Korea International Cooperation Agency (KOICA).

The PLOS One published study was funded by the UCL Grand Challenges Small Grants scheme, which aims to tackle societal problems through cross-disciplinary research. 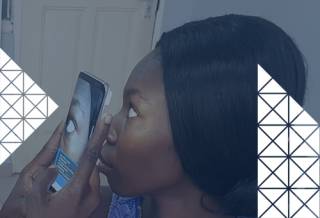 Terence Leung is the Principal Investigator of the Smartphone Imaging Group as well as an Associate Professor in Biomedical Optics and the Undergraduate Programme Tutor for UCL's Biomedical Engineering students. Learn more

Initial coverage of this story in the media include: